Tribute to Our Fallen Employees

Every day Texas State Troopers, Agents and Texas Rangers risk their lives to protect and serve Texas, and they are honored to do so. Some DPS officers pay the ultimate sacrifice, and we are forever grateful to them and their families for their courageous service to the people of Texas. The following is a list of our fallen officers, since 1823, when the agency first began as the Texas Rangers, and since 1935 as the Texas Department of Public Safety, when the Rangers and Highway Patrol were combined into one agency.

Officers Who Have Lost Their Lives In The Line Of Duty

View a monument location list of memorials honoring Texas DPS officers who have died in the line of duty.

"Dedicated to the memory of people of the Texas Department of Public Safety who, in the line of duty,
unselfishly sacrificed their lives in the protection of the lives, property, rights and privileges
of all the people of Texas." 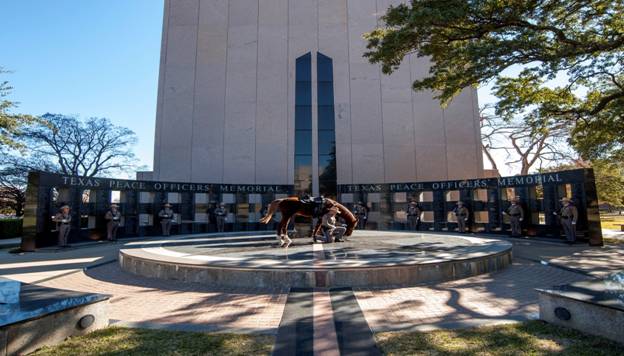 The Texas Department of Public Safety is grateful to the Metcalf Family for their commitment to honoring DPS officers who have given their lives in the service to the State of Texas.

Mr. Metcalf then decided to place memorials—at his own expense—to honor each of the DPS officers who have died in the line of duty. However, he passed away after a lengthy illness and his goal was not realized.

Mr. Metcalf's brother, Don, was touched by his brother's determination to honor all DPS troopers and took up his brother's cause. As of July 2012, each of the 86 DPS troopers killed in the line of duty has been honored with a stone marker.

The Metcalfs will forever hold a special place in the hearts of the entire DPS family.