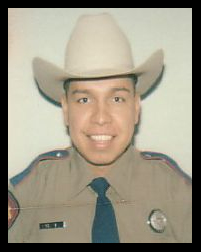 The DPS family lost our third trooper this year when Trooper Eduardo Chavez died in a patrol car accident May 2 near the Hidalgo/Starr county line.Trooper Chavez, 30, stationed in Palmview, was responding to a call to assist his brother, Trooper Enrique Chavez, with a narcotics arrest. A tire blowout caused Chavez to lose control and his vehicle rolled several times. "Trooper Chavez was dedicated to protecting the people of the state of Texas, and he gave his life in service to our state," said Col. Thomas A. Davis Jr. "He was known as a hard-working trooper who wanted to do a professional job. His DPS family will certainly miss him." Trooper Chavez was born in Reynosa, Mexico, and grew up in Bakersfield, Calif. He graduated from high school in Edinburg. He attended South Texas Community College and the University of Texas-Pan American. Before joining DPS in 2003, Chavez had worked as a police communications operator and a deputy sheriff with the Hidalgo County Sheriff's Office. He had been with the DPS since 2003. After graduating with the A-03 Recruit School, Trooper Chavez had been stationed in Zapata, Roma, Rio Grande City and Palmview. He is survived by his wife, Iliana, and their unborn son, who will be named Eduardo Chavez Jr. He is the 81st DPS officer killed in the line of duty and the third to die in 2006. A memorial fund for Trooper Chavez's family has been established at First National Bank, 7201 N. 10th St., McAllen, TX 78504. The account number is 141035757. For any questions about the memorial fund, please contact Lt. Mario Lopez at 956-984-5626.