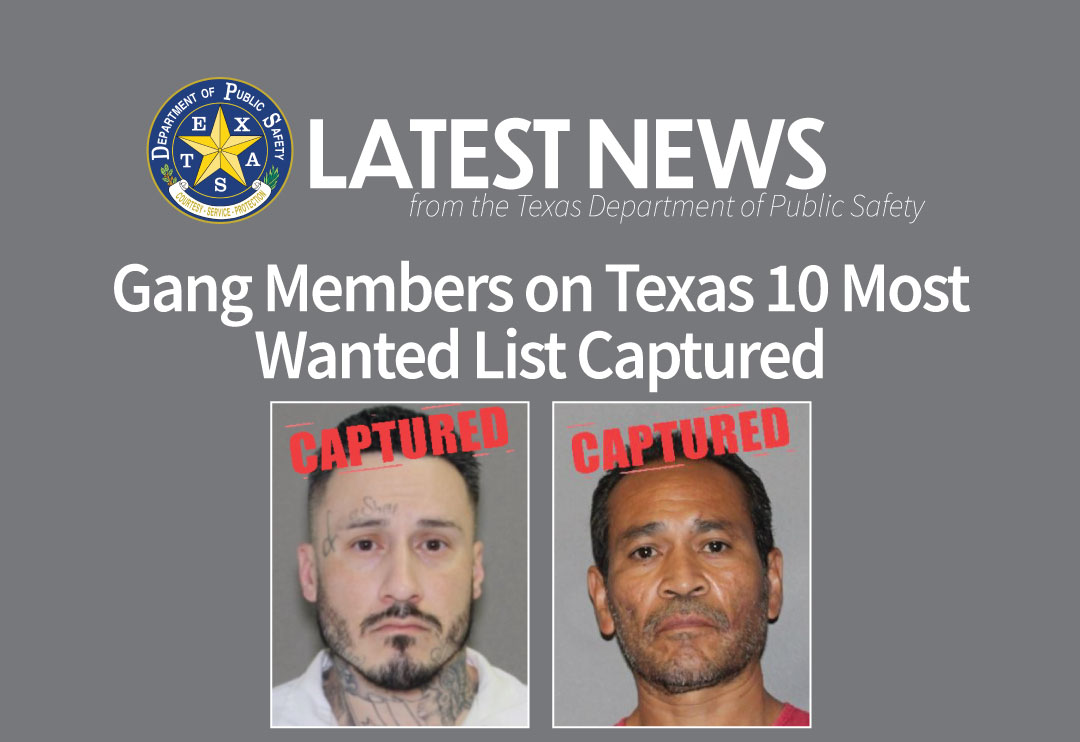 AUSTIN – Two of Texas’ 10 Most Wanted Fugitives are back in custody after their arrests last week. Ruben Alvarado Castro, of San Antonio, was arrested Feb. 15 in San Antonio, and Theodore Villarreal, of Kenedy, was arrested Feb. 17 in Kenedy. Both fugitives are members of the Texas Mexican Mafia. Crime Stoppers rewards will be paid in both arrests.

Ruben Alvarado Castro, 40, was arrested at a hotel by the U.S. Marshals Lone Star Fugitive Task Force, including Texas Department of Public Safety (DPS) Special Agents. Castro was added to the Texas 10 Most Wanted Fugitives List on Jan. 12.

In 2008, Castro was convicted of possession of a firearm after domestic abuse. He was sentenced in federal court to 80 months in prison with 36 months of supervised release, however, his supervised release was revoked multiple times. Castro was released from prison in 2017. In 2019, he was sentenced to three years in a Texas Department of Criminal Justice (TDCJ) prison for fraudulent use/possession of identifying information. Castro was also given six years of probation for unlawful possession of a firearm and three years of probation for possession of a controlled substance. For more information, view his captured bulletin.

Theodore Villarreal, 52, was arrested at a house by the U.S. Marshals Lone Star Fugitive Task Force, including DPS Special Agents. Members of DPS’ Commercial Vehicle Enforcement also assisted in his arrest. Villarreal was added to the Texas 10 Most Wanted Fugitive List on Jan. 20.

He’s been wanted by authorities since March 2020, when the Texas Board of Pardons and Paroles issued a warrant for a parole violation. In June 2021, the Karnes County Sheriff’s Office also issued warrants for Villarreal’s arrest for aggravated assault with a deadly weapon, terroristic threat and assault causing serious bodily injury.

Texas Crime Stoppers, which is funded by the Governor’s Criminal Justice Division, offers cash rewards to any person who provides information that leads to the arrest of one of Texas’ 10 Most Wanted Fugitives or Sex Offenders. So far in 2022, DPS and other agencies have arrested 11 people off the lists, including four gang members and six sex offenders. In addition, $24,000 in rewards has been paid for tips that yielded arrests.