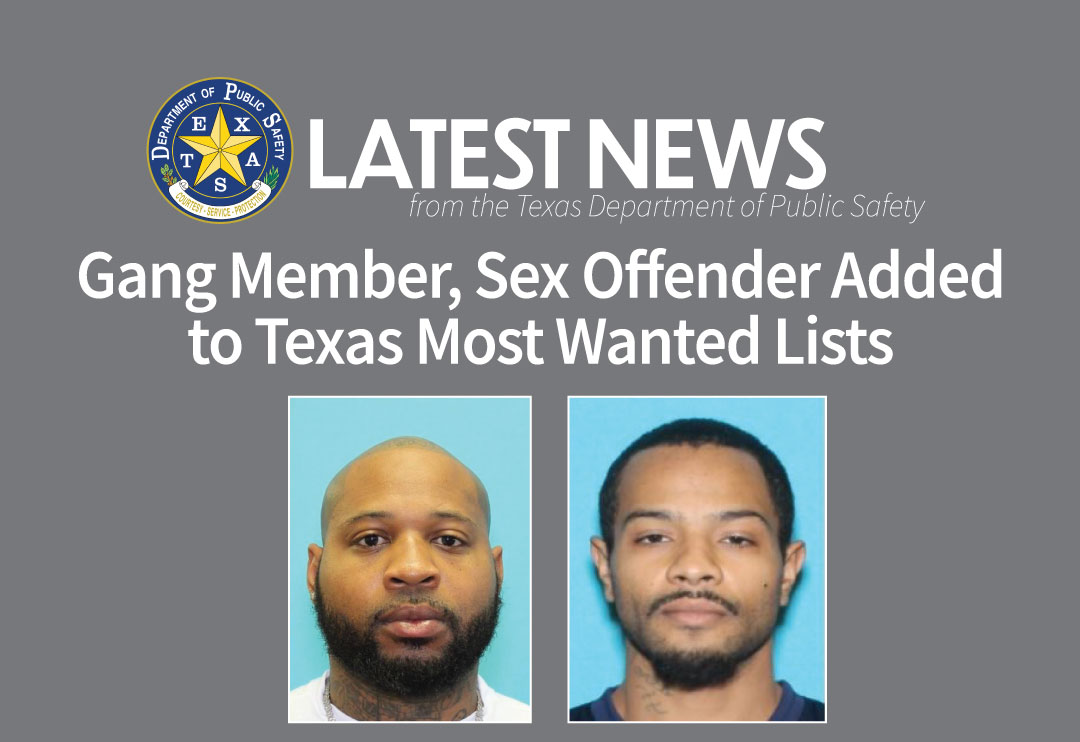 Charles Lee Tillman, Jr., 34, is affiliated with the Crips gang. He’s been wanted since June 4, 2021, when a warrant was issued for his arrest in connection to the May 30 homicide of a man in La Grange. The Texas Board of Pardons and Paroles also issued a warrant for violating his parole. In 2011, Tillman was convicted of assault — family violence and sentenced to three years in a Texas Department of Criminal Justice (TDCJ) prison. In 2015, he was convicted of manufacture/delivery of a controlled substance and sentenced to 14 years in a TDCJ prison. Tillman was released on parole in December 2019.

Tillman is 5 feet 8 inches tall and weighs about 185 pounds. He has tattoos on his neck, chest, back, abdomen, left hand, right leg, both shoulders and arms. He has ties to Missouri City, Weimar and Smithville. For more information or updates in the event of his arrest, view his wanted bulletin.

Bobby Joe Flores, Jr., 34, has been wanted since October 2019, when the Dallas County Sheriff’s Office issued a warrant for continuous sexual abuse of a young child. Duncanville Police also issued a warrant in January 2020 for failure to comply with sex offender registration requirements. Flores was convicted of child molesting/intercourse involving a 1-year-old girl in 2008 in Indiana and was sentenced to two years in a facility in the Indiana Department of Correction. In 2010, he was convicted of failure to register as a sex offender in Indiana and sentenced to 18 months in prison. In addition, his previous sentence was increased to six years. In 2014, Flores moved to Texas with his parole transferred, and began registering as a sex offender in Duncanville.

Flores is 5 feet 5 inches tall and weighs about 140 pounds. He has tattoos on his neck, chest, abdomen, both arms and left wrist and scars on his left arm and wrist. For more information or updates in the event of his arrest, view his wanted bulletin.

Texas Crime Stoppers, which is funded by the Governor’s Criminal Justice Division, offers cash rewards to any person who provides information that leads to the arrest of one of Texas’ 10 Most Wanted Fugitives or Sex Offenders. So far this year, DPS and other agencies have arrested 20 people from the Texas 10 Most Wanted Lists, including eight gang members and nine sex offenders. In addition, $38,500 in rewards has been paid for tips that yielded arrests.