Captured: Two of Texas’ 10 Most Wanted Back in Custody 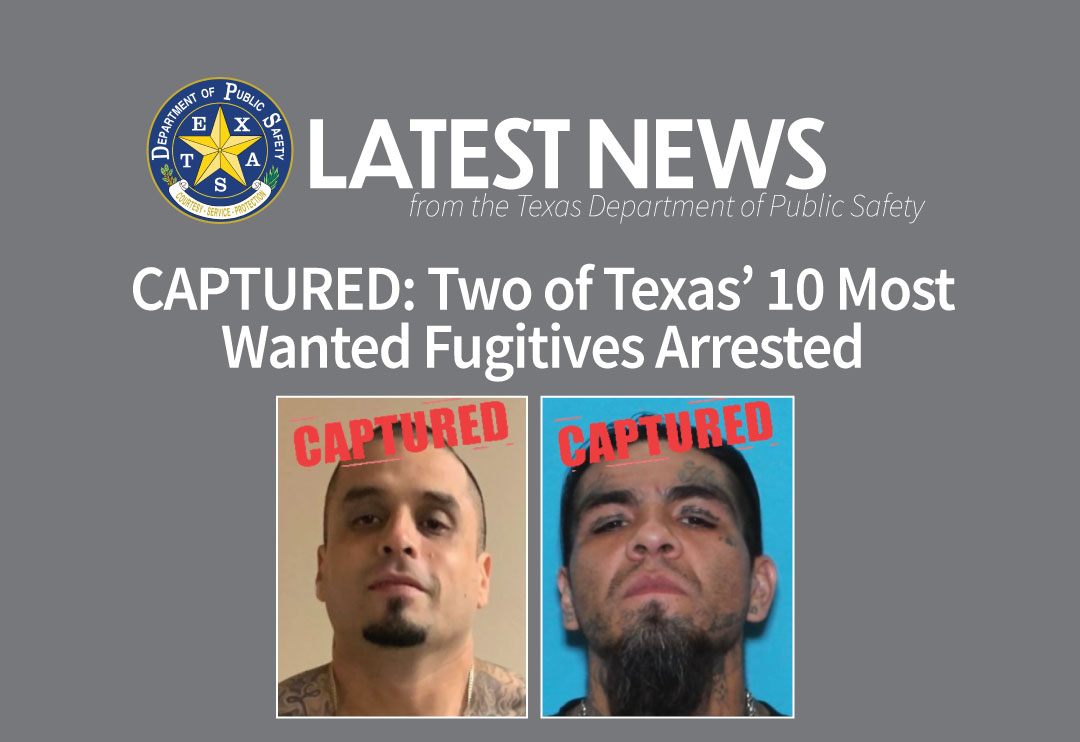 AUSTIN – In the last week authorities have captured two of Texas’ Top 10 fugitives. Texas 10 Most Wanted Fugitive Eric Munoz was captured on May 4, 2021, in Donna, Texas, during Operation Lone Star, while Texas 10 Most Wanted Sex Offender Marcus Lee Torres was arrested on May 7, 2021, in Snyder, Texas. Crime Stoppers rewards will not be paid in either case.

Eric Munoz, 33, is affiliated with the Tango Blast Valluco gang. He was arrested by Texas Department of Public Safety (DPS) Special Agents and Texas Highway Patrol Troopers. Working off investigative information, they located and arrested Munoz during a traffic stop on a residential street in Donna. He had narcotics and currency in his possession at the time.

Munoz was added to the Texas 10 Most Wanted Fugitive list on April 29, 2021. He was released from prison in 2017 and was placed on parole. Munoz had been wanted by authorities since Oct. 25, 2020, after the Texas Board of Pardons and Paroles issued a parole violation warrant for his arrest. Previously, he had been convicted of multiple criminal offenses, including unlawful possession of a firearm by a felon. For additional information, view his captured bulletin.

Marcus Lee Torres, 39, was added to the Texas 10 Most Wanted Sex Offender List on April 1, 2021. He was arrested on May 7 following a citizen’s call of a suspicious person in Snyder. Snyder Police Officers apprehended Torres on a residential street following a short foot pursuit.

Torres had been wanted by law enforcement since he was released from a Texas Department of Criminal Justice (TDCJ) Facility on Jan. 30, 2020, and failed to report to his parole officer. He had an active arrest warrant for a parole violation. An additional warrant for failure to comply with sex offender registration requirements was issued by the El Paso County Sheriff’s Office in April 2020. Torres was sentenced to 30 years in a TDCJ prison after he was convicted in Nolan County on two counts of aggravated sexual assault for sexually assaulting two young boys, ages 7 and 9. For more information, view his captured bulletin.

Texas Crime Stoppers, which is funded by the Governor’s Criminal Justice Commission, offers cash rewards to any person who provides information that leads to the arrest of one of Texas’ 10 Most Wanted fugitives or sex offenders. In 2020, Texas Crime Stoppers paid $20,000 in rewards for anonymous tips that resulted in arrests.

All tips are anonymous, regardless of how they are submitted, and tipsters will be provided a number instead of using a name.

DPS investigators work with local law enforcement agencies to select fugitives for the Most Wanted Fugitives and Sex Offender lists. You can find the current lists — with photos — on the DPS website.