The objective of the Uniform Crime Reporting program is to produce reliable crime statistics for law enforcement administration, operation, and management. This information is also available as a measure of the fluctuations in the type and volume of crime in Texas through the collection of data on the ten serious Index Crime Offenses.

Overtime, modifications to the original NIBRS collection were necessary to ensure accurate capture of additional information to include: 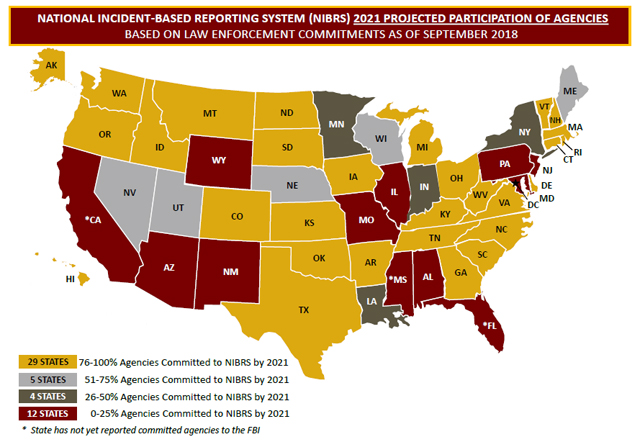 The Texas version of NIBRS, includes all national data elements as well as Texas-specific data. As of January 2022, The State of Texas UCR program is currently collecting information from 1,015 NIBRS-certified agencies. At this time, there is not a separate publication for IBR data. IBR data is converted to summary for its inclusion in the Crime in Texas report.

The Uniform Crime Reporting Program (UCR) provides a nationwide view of crime based on the submission of crime information by law enforcement agencies throughout the country. This data is used in law enforcement administration, operation, and management, as well as to indicate the level and nature of crime in the United States.

In addition, there are 10 Group B offense categories for which only arrest data are reported. Most Group B offenses only come to law enforcement attention when arrests are made.

The Department has put together a series of documents from various sources that will assist agencies in their transition to NIBRS. The NIBRS Transition Packet includes information regarding steps to certification, the effect NIBRS reporting has on an agency's crime statistics, media kits, etc. This information has been developed by the Department of Public Safety, the Federal Bureau of Investigation, Uniform Crime Reporting Section, law enforcement, and the Bureau of Justice Statistics, specifically the National Crime Statistics Exchange (NCS-X) Project.

Questions regarding NIBRS transition can be directed to the DPS UCR NIBRS team at (512) 424-2091 or via email.

This yearly “LEE survey” (i.e. data collection)  is submitted through the Texas UCR Repository. It allows local agencies the opportunity to submit their LEE numbers, which is used for statistics, grant funding, and state leadership decisions. The FBI sets the dates that the LEE survey is open for each reporting year. Typically, the collection window is open for a limited time, from the beginning of November through mid-January.

The LEE data allows the National UCR Program to:

Violence within Texas families has been recognized as a growing threat to the safety of Texans. In an effort to quantify the incidents of abuse occurring within Texas families, the 71st Texas Legislature directed the Department of Public Safety to collect information on family violence incidents. This data collection commenced with calendar year 1991.

Under mandate of state and federal law, in 1992, the Texas UCR program began collecting hate crime information. The Hate Crime Statistics Act of 1990 directed the U.S. Attorney General to collect data, "about crimes that manifest evidence of prejudice based on race, religion, sexual orientation, or ethnicity." Disability was added to the list of bias categories in 1997.

Shortly after the passage of the national law, the Texas Legislature amended the Texas Government Code to require the Department of Public Safety to, "Establish and maintain a central repository for the collection and analysis of information relating to crimes that are motivated by prejudice, hatred, or advocacy of violence." The passage of this law impacted every law enforcement agency in Texas through the requirement that, "Local law enforcement agencies shall report offenses described by Subsection (a) in the form and manner and at regular intervals as prescribed by rules adopted by the department."

In response to a growing concern about sexual assault incidents, the 80th Texas Legislative Session passed House Bill 76. The Bill requires that Texas DPS establish guidelines and collect, as part of the UCR Program, data about incidents that contain specific sexual assault offenses. Sexual Assault crime data collection began in the calendar year 2008. Special consideration had to be taken to disseminate the data collection guidelines for Sexual Assault reporting due to the nature of the difference between UCR offense definitions and Texas penal code definitions. In the Texas UCR program, rape is the only offense collected under the crime index. Since there is greater variance in the offenses collected in the compilation of Sexual Assault data, this data collection should in no way be compared to the statistics maintained in the National UCR program.

Drug seizure information is presented in compliance with Health & Safety Code, Sec. 481.185, and its requirement that “All law enforcement agencies in this state shall file monthly with the [DPS] Director a report of all arrests for drug offenses made and quantities of controlled substances seized by them during the preceding month.” Drug Seizure crime data collection began in the calendar year 1992.