Two of Texas’ Most Wanted from Duncanville, Ferris Back in Custody 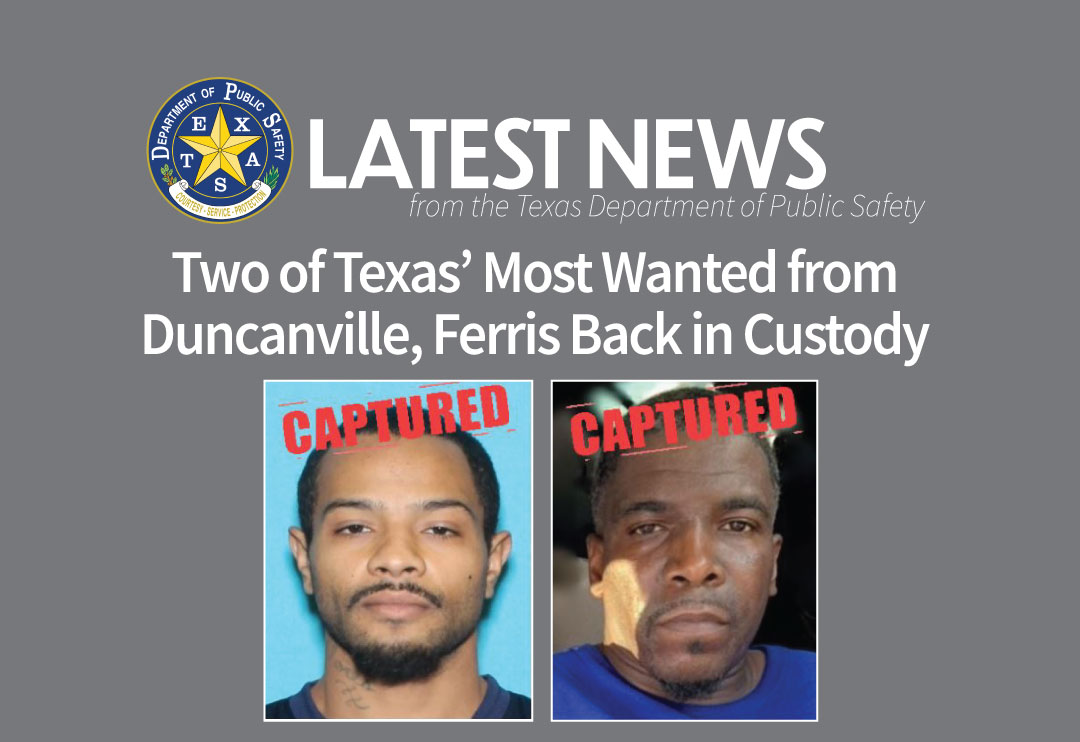 AUSTIN – Two of Texas’ 10 Most Wanted offenders are back in custody following their arrests earlier this month, including one fugitive and one sex offender. Texas 10 Most Wanted Sex Offender Bobby Joe Flores Jr. was arrested on Jan. 16 in Los Angeles. Texas 10 Most Wanted Fugitive Marcus Jarmine Wallace was captured Jan. 18 in McAllen. A Crime Stoppers reward will be paid in the Flores’ arrest.

Bobby Joe Flores Jr., 34, of Duncanville, was arrested by Los Angeles Police officers at an apartment. He was added to the Texas 10 Most Wanted Sex Offenders List on Sept. 28, 2021, and was the January featured fugitive. Flores had been wanted by authorities since October 2019, when the Dallas County Sheriff’s Office issued a warrant for his arrest for continuous sexual abuse of a young child. The Duncanville Police Department also issued a warrant in January 2020 for failure to comply with sex offender registration requirements.

In 2008, Flores was convicted of child molesting/intercourse involving a 1-year-old girl in Indiana and was sentenced to two years in the Indiana Department of Correction. In 2010, he was convicted of failure to register as a sex offender in Indiana and sentenced to 18 months in prison. In addition, his previous sentence was increased to six years. In 2014, Flores moved to Texas and was required to register as a sex offender in Duncanville where he lived. For more details, view his captured bulletin.

Marcus Jarmine Wallace, 40, of Ferris, was arrested in the parking lot of a shopping center in McAllen. Working off investigative information, Texas Department of Public Safety (DPS) Special Agents coordinated with Texas Highway Patrol to locate and arrest him. Wallace, who is affiliated with the Crips gang, was added to the Texas 10 Most Wanted Fugitives List on Jan. 18, the same day he was arrested.

Wallace had been wanted since November 2020, when the Dallas County Sheriff’s Office issued warrants for aggravated promotion of prostitution and online promotion of prostitution. The Texas Board of Pardons and Paroles also issued a warrant for a parole violation in February 2021. Wallace was initially convicted in 2006 for engaging in organized criminal activity and bail jumping/failure to appear. He was sentenced to 15 years in a Texas Department of Criminal Justice (TDCJ) prison. In 2013, Wallace was convicted of evading arrest/detention with a previous conviction and sentenced to six months in prison. He was released on parole in May 2020. For more details, view his captured bulletin.

Texas Crime Stoppers, which is funded by the Governor’s Criminal Justice Division, offers cash rewards to any person who provides information that leads to the arrest of one of Texas’ 10 Most Wanted Fugitives or Sex Offenders. So far in 2022, DPS and other agencies have arrested three Texas 10 Most Wanted Fugitives and Sex Offenders, including one gang member and two sex offenders. In addition, $6,000 in rewards has been paid for tips that yielded arrests.