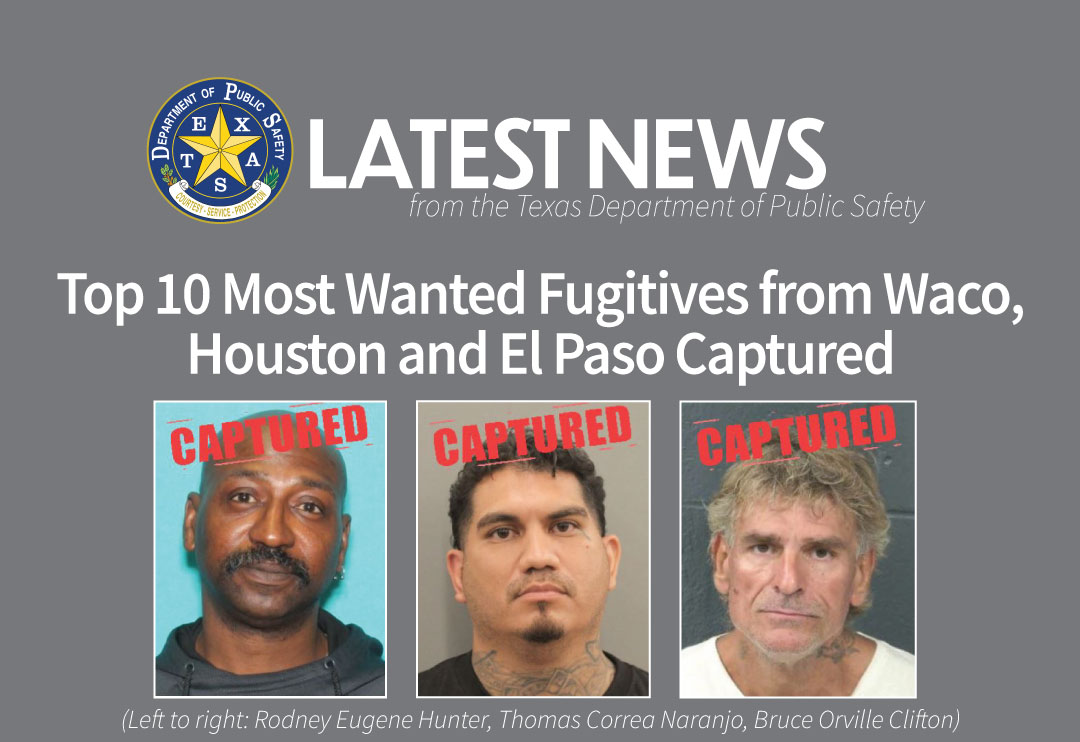 In 1992, Hunter was convicted of unauthorized use of a motor vehicle and two counts of burglary of a habitation. He received three nine-year sentences to be served concurrently. In 1997, Hunter was convicted of two counts of indecency with a child by sexual contact following incidents involving a 7-year-old girl. He received two 15-year sentences in a Texas Department of Criminal Justice (TDCJ) facility. For more information, view his captured bulletin.

Thomas Correa Naranjo, 41, is a member of the Texas Syndicate Gang. He was arrested at a location in north-central Houston by Houston Police Department SWAT. Naranjo had been wanted since May 2021, after the Texas Board of Pardons and Paroles issued a warrant for a parole violation. In July 2021, the Harris County Sheriff’s Office issued a warrant for his arrest for assault of a family/household member with previous conviction.

Bruce Orville Clifton, 56, was arrested at a storage facility in Mesilla Park, N.M. The multi-agency fugitive investigation involved members of the U.S. Marshals (USMS) Lone Star Fugitive Task Force from El Paso, including DPS Special Agents, along with members of the USMS District of New Mexico-Southwest Investigative Fugitive Task Force and New Mexico State Police-Fugitive Apprehension Unit. Clifton had been wanted since January 2022, after the Texas Board of Pardons and Paroles issued a warrant for a parole violation. In February 2022, the El Paso County Sheriff’s Office issued a warrant for his arrest for failure to comply with sex offender registration requirements.

Texas Crime Stoppers, which is funded by the Governor’s Criminal Justice Division, offers cash rewards to any person who provides information that leads to the arrest of one of Texas’ 10 Most Wanted Fugitives or Sex Offenders. So far in 2022, DPS and other agencies have arrested 44 Texas 10 Most Wanted Fugitives and Sex Offenders, including 17 gang members and 24 sex offenders. In addition, $72,000 in rewards has been paid for tips that yielded arrests.