Top 10 Most Wanted Fugitives Captured in Houston, Edinburg and Austin 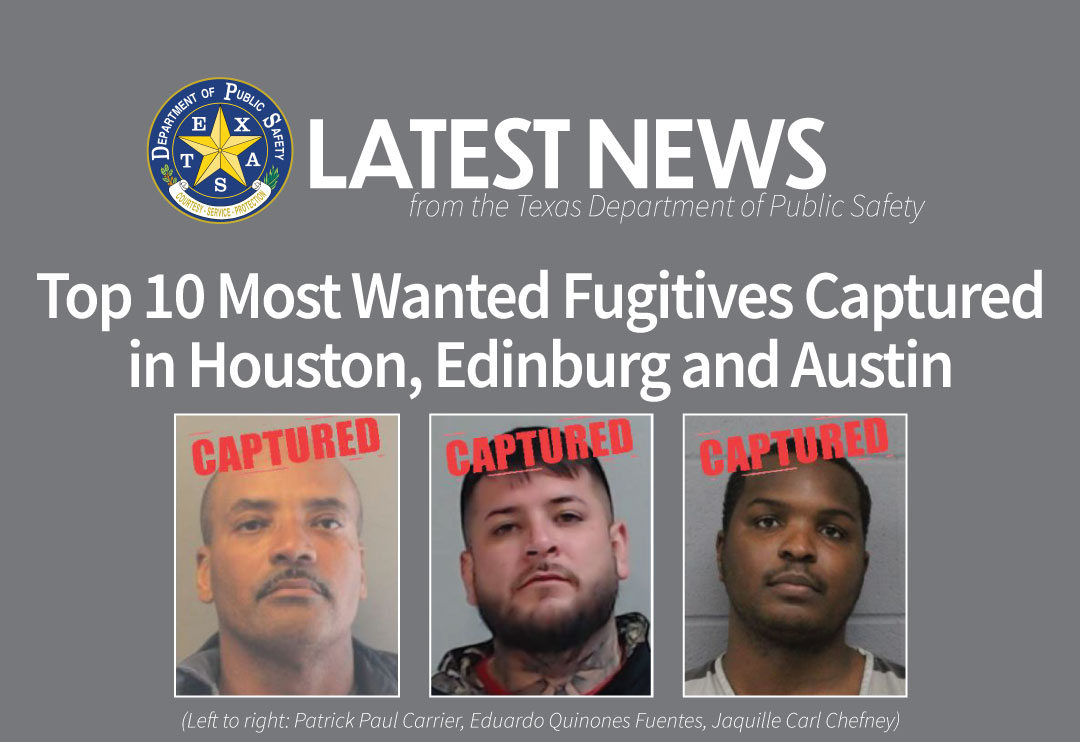 Patrick Paul Carrier, 47, of Houston, was arrested by Texas DPS Special Agents and Troopers on November 21. In 1993, Carrier was convicted of murder and received a 45-year sentence. In 2013, he was convicted of possession of cocaine and subsequently sentenced to six months of confinement. He was last released on parole in October 2020.

Eduardo Quinones Fuentes, 28, of Edinburg, was arrested by members of the U.S. Marshals Gulf Coast Violent Offender’s Fugitive Task Force, including the U.S. Border Patrol, on November 23. In 2016, Fuentes was convicted of assault of family/household member by impeding breath/circulation and sentenced to two years of confinement. The following year, he was convicted of smuggling aliens and served time in federal custody. In 2021, he was convicted of sexual assault after an incident involving a 29-year-old woman. He subsequently received 10 years of probation.

Fuentes had been wanted since July 2021, when the U.S. Marshals Service issued a probation violation warrant for his arrest. Additionally, Fuentes had been wanted by the Hidalgo County Sheriff’s Office for a probation violation, two counts of aggravated assault with a deadly weapon and one count of unlawful possession of a firearm by felon. For more information, view his captured bulletin.

Jaquille Carl Chefney, 25, of Austin, was arrested by members of the U.S. Marshals Lone Star Fugitive Task Force, including DPS Special Agents on November 28. The Austin Police Department, Williamson County Sheriff’s Office, Texas Attorney General’s Office and U.S. Immigration and Customs Enforcement all assisted in the multi-agency fugitive investigation. In 2020, Chefney was convicted of terroristic threat and sentenced to two years of probation. In 2021, he was convicted of aggravated robbery and sentenced to six years of probation.

Chefney had been wanted since February 2022, when the Austin Police Department issued warrants for his arrest for aggravated sexual assault and arson. Additionally, in July 2022, the Travis County Sheriff’s Office issued a warrant for his arrest for a probation violation. For more information, view his captured bulletin.

Texas Crime Stoppers, which is funded by the Governor’s Criminal Justice Division, offers cash rewards to any person who provides information that leads to the arrest of one of Texas’ 10 Most Wanted Fugitives or Sex Offenders. So far in 2022, DPS and other agencies have arrested 66 Texas 10 Most Wanted Fugitives and Sex Offenders, including 22 gang members and 35 sex offenders. In addition, $88,000 in rewards has been paid for tips that yielded arrests.