Three of Texas’ Most Wanted are Now Back in Custody 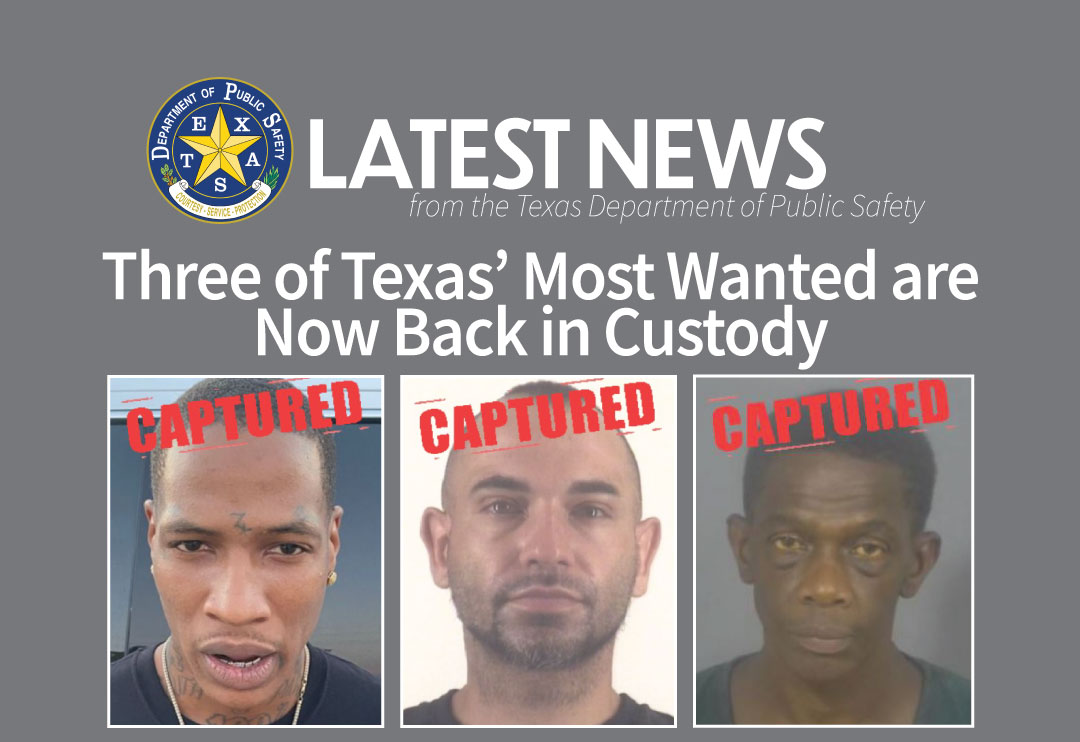 Xavier Montreal Benard, 31, of Houston, is affiliated with the 52 Hoover Gangster Crips gang. He was arrested by the U.S. Marshals Gulf Coast Violent Offenders and Fugitive Task Force, which includes Texas Department of Public Safety (DPS) Special Agents, in the parking lot of a business in North Houston. The Harris County Sheriff’s Office Tactical Unit, the Texas Highway Patrol, the Texas Department of Criminal Justice (TDCJ) OIG and the Fort Bend County District Attorney’s Office all provided assistance in the investigation.

Benard was added to the Texas 10 Most Wanted Fugitives List on Aug. 11, 2021. He’d been wanted by authorities since Oct. 4, 2019, after the Texas Board of Pardons and Paroles issued a warrant for violating his parole. A warrant had also been issued by the Harris County Sheriff’s Office in October 2019 for failure to appear for a previous offense. Benard was initially convicted of aggravated robbery in 2005, and was sentenced to four years in a TDCJ prison. In 2016, he was convicted of two counts of manufacturing/delivering a controlled substance, and in 2018, Benard was convicted of firearm smuggling. He was released on parole in May 2019. For more information view his captured bulletin.

Valentine Johnathan Price, 37, of Fort Worth, was arrested by the Fort Worth Police Department (FWPD) near a store on the south side of the city. He was added to the Texas 10 Most Wanted Sex Offenders List on Aug. 23, 2021. Price has been wanted since May 2020, when he violated his parole and absconded from his last known address in Fort Worth. FWPD also issued two warrants for failure to register as a sex offender.

In 2002, Price was convicted of sexual assault of a child following an incident with a 4-year-old girl. In 2018, he was convicted of failure to comply with a sex offender’s duty to register and was sentenced to three years in a TDCJ prison. Price was released on parole in January 2020. For more information view his captured bulletin.

Henry Anthony Taylor, 52, of San Antonio, was arrested on a street in central South Bend, Ind., by the South Bend Police Department. He was added to the Texas 10 Most Wanted Sex Offenders List on April 1, 2021. Taylor has been wanted since April 2020, when he absconded from his last known address in San Antonio. The Bexar County Sheriff’s Office issued a warrant for failure to register as a sex offender.