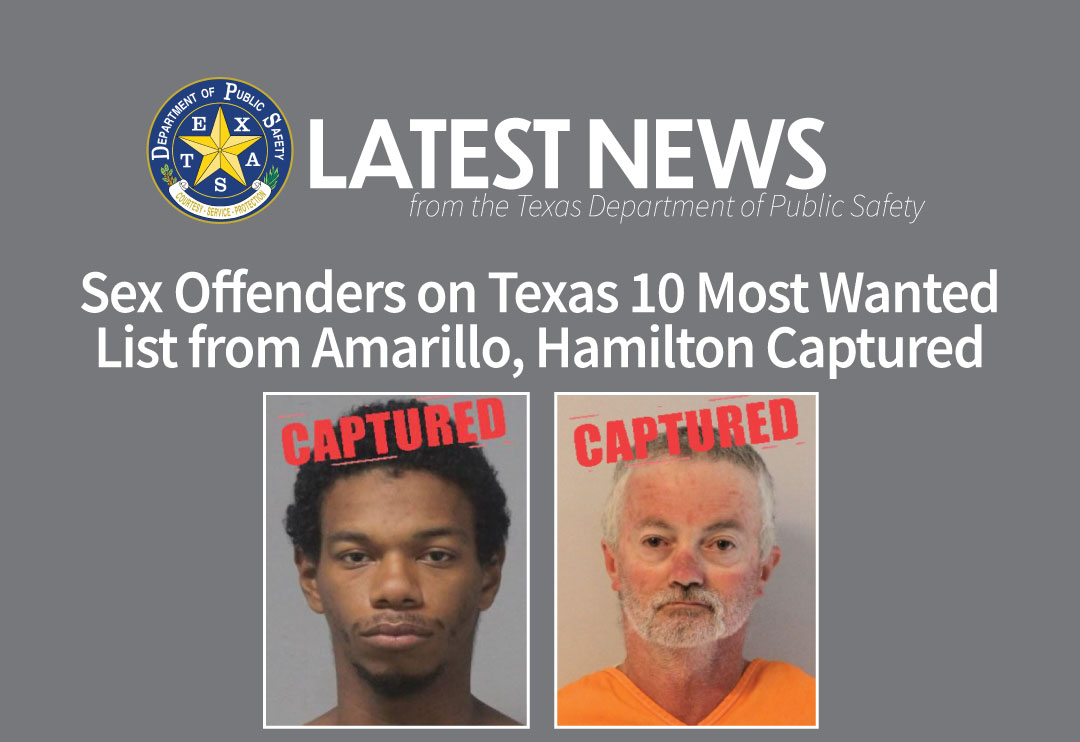 AUSTIN – Two of Texas’ 10 Most Wanted Sex Offenders are back in custody. Bryant Keith Martin Jr., of Amarillo, was arrested on Aug. 16 in Amarillo. Joseph Darwin Watson, of Hamilton, was captured on Aug. 18 in Stephenville. The arrests were not from tips, so no rewards will be paid.

Bryant Keith Martin Jr., 28, was arrested by Amarillo Police. Working off investigative information, they found him at a resource center in central Amarillo. He was added to the Texas 10 Most Wanted Sex Offender List on Aug. 9. Martin has been wanted since December 2020, when a warrant for his arrest was issued in Potter County for failure to register as a sex offender.

In 2014, Martin was convicted in Randall County on one count of aggravated sexual assault of a child and two counts of indecency with a child by sexual contact for incidents involving two girls, ages 5 and 6. He received seven years probation. In 2015, Martin was convicted of failure to comply with sex offender registration requirements and was sentenced to four years in a Texas Department of Criminal Justice (TDCJ) prison. His probation was also revoked. In 2019, Martin was released from prison and registered as a sex offender in Amarillo. For more information view his captured bulletin.

Joseph Darwin Watson, 52, was arrested by Stephenville Police. Working off investigative information, they located and arrested Watson at an apartment complex. He was added to the Texas 10 Most Wanted Sex Offender List on Aug. 4. Watson is a high-risk sex offender who is required to register every three months for life. He’s been wanted since October 2020, when a warrant was issued for his arrest in Hamilton County for failure to comply with registration requirements.

In 2009, Watson was convicted of sexual assault involving a 47-year-old woman in Milam County and received a 10-year sentence in a TDCJ prison. He was discharged in 2018 and was registered as a sex offender in Hamilton. For more information view his captured bulletin.

Texas Crime Stoppers, which is funded by the Governor’s Criminal Justice Division, offers cash rewards to any person who provides information that leads to the arrest of one of Texas’ 10 Most Wanted fugitives or sex offenders. So far this year DPS and other agencies have arrested 13 of Texas’ 10 Most Wanted Fugitives and Sex Offenders, including four gang members and seven sex offenders. In addition, $20,500 in rewards have been paid for tips that have yielded arrests.