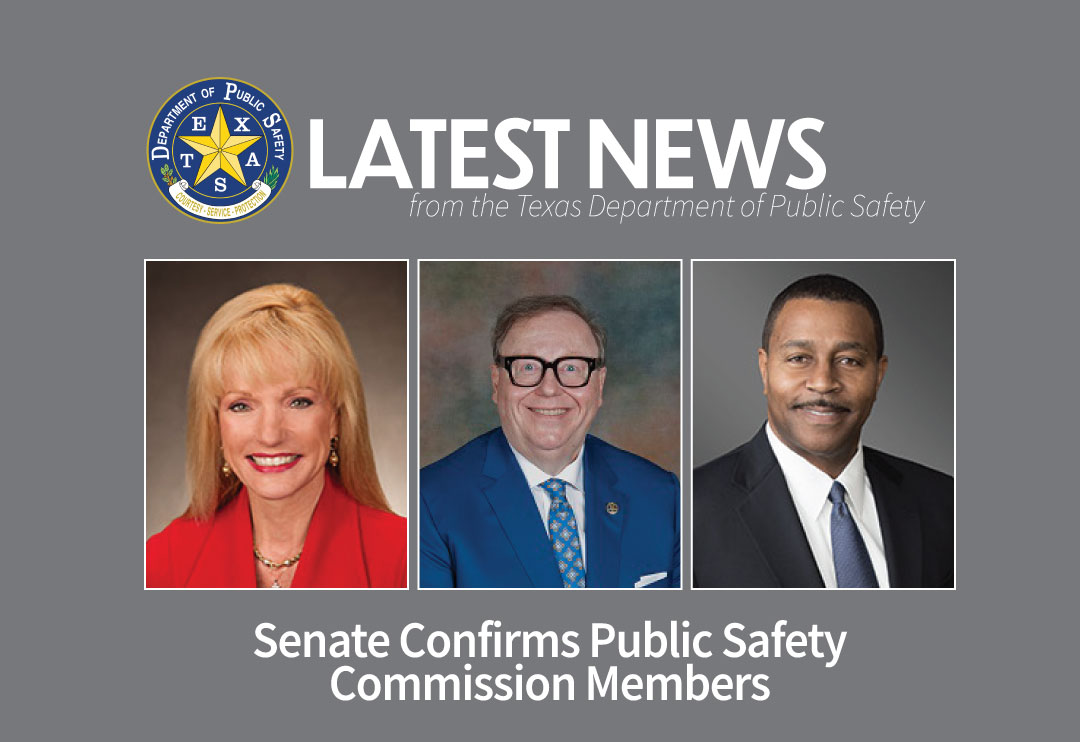 “On behalf of the entire department, I’d like to thank members of the state senate for their work in confirming Commissioners Blair, Stodghill and Wainwright,” said DPS Director Steven McCraw. “We look forward to their leadership and guidance as we work together to serve Texans and make the state of Texas a safer place to call home.”

Nelda L. Blair of The Woodlands was appointed to the Texas Public Safety Commission by Governor Greg Abbott on January 6, 2020, and confirmed on April 8, 2021. Commissioner Blair is a triple board certified attorney and CEO of The Blair Law Firm, P.C. A fifth generation Texan, she is a gubernatorial appointee and secretary of the Stephen F. Austin State University Board of Regents, former gubernatorial appointee and former chair of the University of Houston System Board of Regents, and former gubernatorial appointee to the Texas Economic Development Corporation Board of Directors. She is a member of the State Bar of Texas and former chair of its regional Grievance Committee, a licensed realtor member of the Houston Association of Realtors, and a member and former board member of the Economic Development Partnership of The Woodlands. Commissioner Blair is chair and president of the Conroe ISD Education Foundation and of the Humane Society of Montgomery County, member of the Greater Houston Women's Chamber of Commerce and the Greater Houston Partnership, and founding chair of The Woodlands Convention & Visitors Bureau. Additionally, she is a member and former chair of The Woodlands Area Chamber of Commerce, former chair of The Woodlands Township, and a former member of the Texas Conference for Women Advisory Board. Blair serves on the Spirit of Texas Bancshares and Spirit of Texas Bank boards. Blair received a bachelor of arts in Pre-Law, Economics and Sociology from Baylor University and a Juris Doctor degree from the University of Houston Law Center. Her term on the Public Safety Commission expires January 1, 2026.

Steve H. Stodghill of Dallas was appointed to the Texas Public Safety Commission by Governor Greg Abbott on September 6, 2019, and confirmed on March 31, 2021. Stodghill is a partner at Winston & Strawn, LLP, a member of the State Bar of Texas, the Dallas Bar Association and a research fellow for the Southwestern Legal Foundation. Additionally, he is a former member of the American Bar Association and the Texas Bar Foundation and a charter member of the Patrick E. Higginbotham American Inn of Court. He is chairman of the American Film Institute National Council, board member of The University of Texas (UT) Harry Ransom Center, UT College of Liberal Arts Advisory Board, and the UT System Chancellor's Council. Additionally, he is a member of the Southern Methodist University Meadows School of the Arts Executive Board and a former member of the Boy Scouts of America Circle Ten Council Executive Committee. Stodghill received a bachelor of arts from UT Austin and a Juris Doctor degree from UT School of Law. His term on the Public Safety Commission expires January 1, 2024.

Dale Wainwright of Austin was appointed to the Texas Public Safety Commission by Governor Greg Abbott on January 6, 2020, and confirmed on April 28, 2021. Wainwright is an attorney and shareholder of Greenberg Traurig, where he is co-chair of the firm's National Appellate Practice and chair of the Texas Appellate Practice. Prior to joining Greenberg Traurig, he served as a Justice on the Texas Supreme Court for 10 years, and as Judge of the 334th Judicial District Court in Harris County. Commissioner Wainwright is a gubernatorial appointee and chair of the Texas Board of Criminal Justice, member of the U.S. Chamber Litigation Center Board of Directors, an advisor to the Texas Supreme Court Access to Justice Commission's Legislative Committee, and a trustee of the Center for American and International Law. In addition to being an elected member of the American Law Institute, he is a trustee and former president of the Texas Supreme Court Historical Society, former member of the Houston Bar Association Board of Directors, and former president of the Houston Young Lawyers Association. Wainwright earned a bachelor of arts in Economics from Howard University and a Juris Doctor from the University of Chicago School of Law. His term on the Public Safety Commission expires January 1, 2024.

PSC Chairman Steven P. Mach will continue his role as chair. The fifth seat on the commission remains vacant at this time.