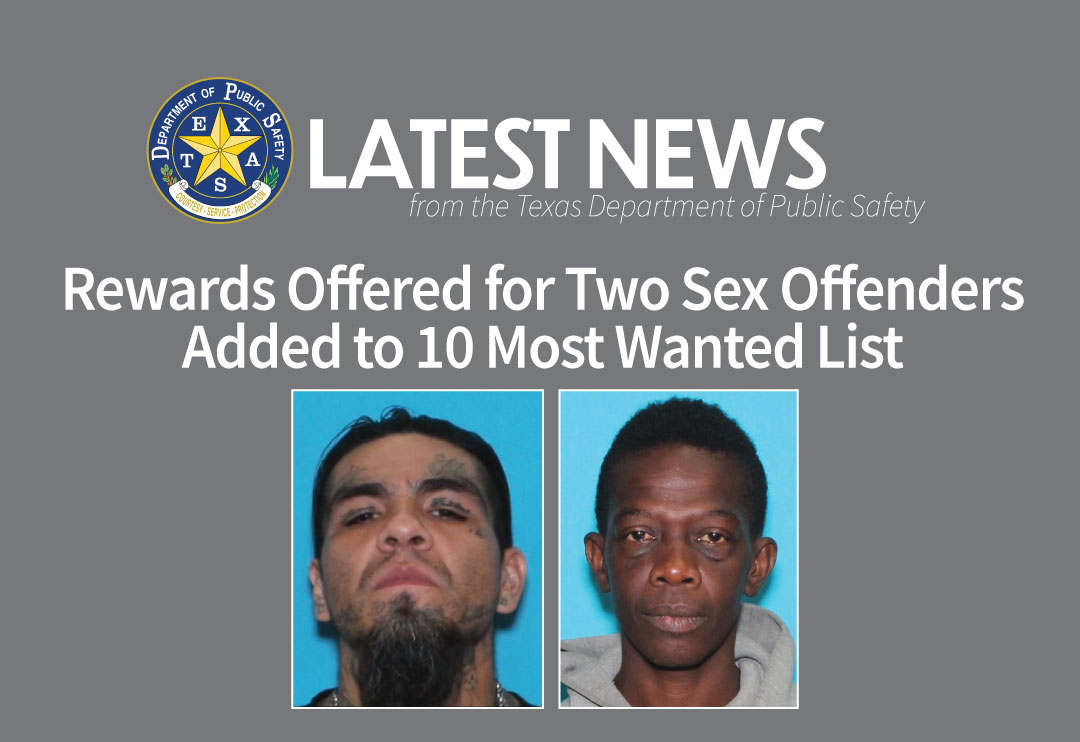 AUSTIN – The Texas Department of Public Safety (DPS) has added two fugitives to the Texas 10 Most Wanted Sex Offenders list, and cash rewards of up to $3,000 each are now being offered for information leading to their captures. Marcus Lee Torres, 39, is wanted for failure to comply with sex offender registration requirements and a parole violation. Henry Anthony Taylor, 52, who is a high-risk sex offender, is wanted for failure to register as a sex offender. All tips are guaranteed to be anonymous.

Torres has been wanted since January 2020, when he violated his parole by not showing up to meet his parole officer and absconding from his last known address in Amarillo. In 1998, Torres was sentenced to 30 years in a Texas Department of Criminal Justice (TDCJ) prison after he was convicted in Nolan County on two counts of aggravated sexual assault for sexually assaulting two young boys, ages 7 and 9.

Torres is 5 feet 7 inches tall and weighs approximately 175 pounds. He has tattoos on his head, face, neck, left shoulder, back, chest, abdomen, arms, hands and legs. For more information or updates in the event of his arrest, view his wanted bulletin.

Taylor has been wanted since April 2020, when he absconded from his last known address in San Antonio. In 1993, Taylor was convicted of rape in Indiana following an incident involving a 17-year-old girl. In 2012, Taylor was convicted of two counts of sexual assault after sexually assaulting a 54-year-old female. He subsequently was given two concurrent 8-year sentences in a TDCJ prison.

Taylor is 5 feet 11 inches tall and weighs approximately 150 pounds. He has tattoos on his chest and upper right arm, and scars on his right forearm, right knee and left leg. For more information or updates in the event of his arrest, view his wanted bulletin.

Texas Crime Stoppers, which is funded by the Governor's Criminal Justice Division, offers cash rewards to any person who provides information that leads to the arrest of one of Texas’ 10 Most Wanted fugitives or sex offenders. In 2020, Texas Crime Stoppers paid $20,000 in rewards for anonymous tips that resulted in arrests.

All tips are anonymous – regardless of how they are submitted – and tipsters will be provided a tip number instead of using a name.

DPS investigators work with local law enforcement agencies to select fugitives for the Texas 10 Most Wanted Fugitive and Sex Offender lists. You can find the current lists – with photos – on the DPS website.