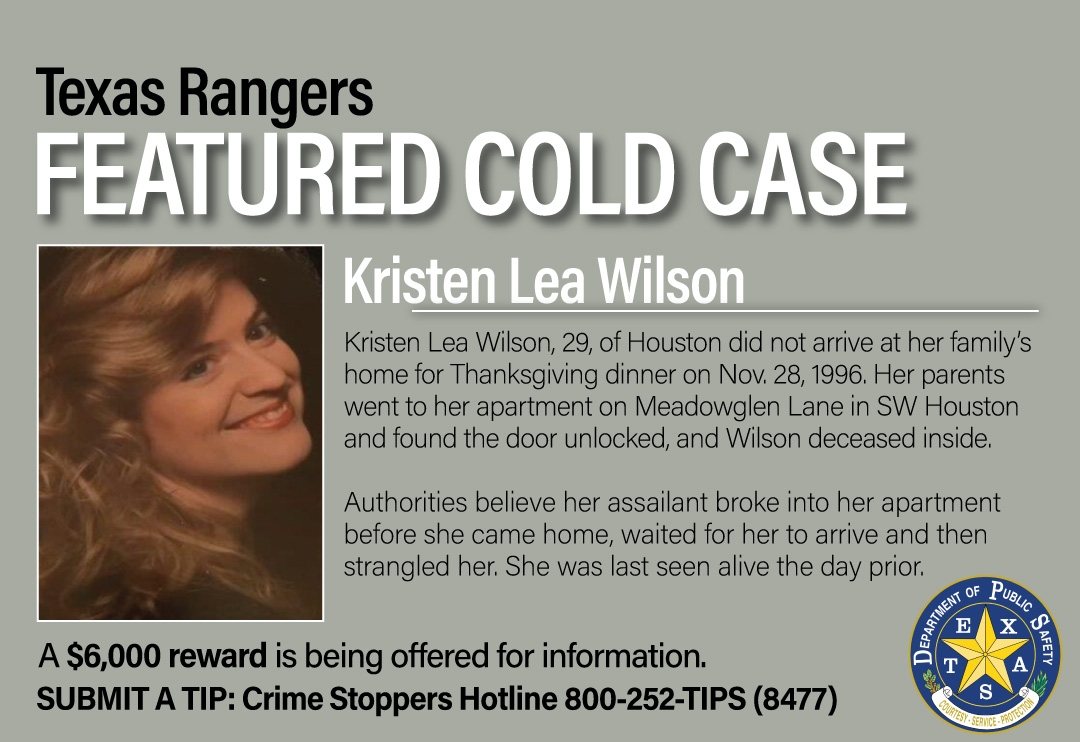 AUSTIN – The Texas Department of Public Safety (DPS) is seeking information in the 1996 slaying of Kristen Lea Wilson, 29, of Houston. An increased reward of up to $6,000 is being offered for information that leads to the arrest of those responsible if the tip is received before the next featured cold case is announced. A $3,000 reward for information leading to an arrest is routinely offered on all cases on the Texas Rangers’ Cold Case website.

On Nov. 28, 1996, Wilson did not arrive at her family’s home for Thanksgiving dinner. Her parents went to her apartment on Meadowglen Lane in southwest Houston and found the door unlocked and Wilson deceased inside.

Authorities believe Wilson’s assailant broke into her apartment before she came home, waited for her to arrive, and then strangled her. Wilson was found partially nude, and she may have been sexually assaulted by her attacker, as well. Investigators determined that nothing was taken from her apartment. Wilson was last seen alive the day prior, on Nov. 27.

The Houston Police Department (HPD) investigated the case extensively, but no leads were developed. The Texas Rangers are assisting HPD with the investigation. During the course of the investigation, several people were cleared from suspicion, but no suspects were identified. Anyone with details regarding the homicide is asked to come forward with information.

To be eligible for cash rewards, tipsters MUST provide information to authorities by calling the Crime Stoppers hotline at 1-800-252-TIPS (8477). All tips are anonymous. Individuals can also submit information through the Texas Rangers’ Cold Case website or by phone to the Missing Person Hotline at 1-800-346-3243.

The Texas Rangers’ Cold Case website provides information on more than 125 cases in an effort to garner public interest in unsolved or cold cases. Texas Crime Stoppers offers rewards (funded by the Governor’s Criminal Justice Division and administered by DPS) of up to $3,000 for information that leads to the arrest of those responsible for any Ranger cold case listed on the website. For more information, visit the Texas Rangers’ Cold Case website.

As part of a DPS public awareness program, one case from the Texas Ranger Unsolved Crime Investigation (Cold Case) Program will be featured bi-monthly in an effort to generate new investigative leads and attention to these cold cases. The Texas Crime Stoppers reward is increased up to $6,000 for the featured case in hopes that the higher reward money will generate additional tips. The higher reward amount only be paid if the tip is submitted before the next case is featured.

The Texas Ranger Unsolved Crimes Investigation Program was created to assist Texas law enforcement agencies investigating unsolved homicides or violent serial crimes. Since there is no statute of limitations on the offense of murder, investigators pursue these cases to a successful resolution or until no viable leads remain.