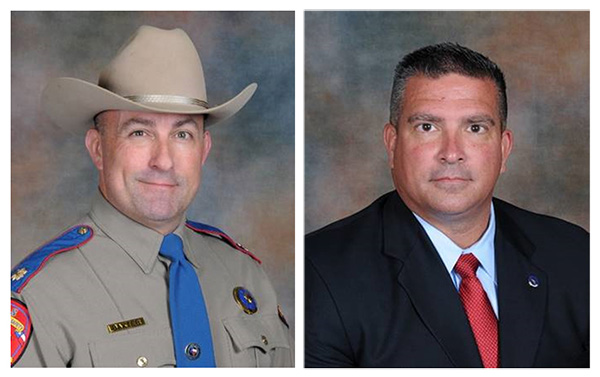 AUSTIN – Following approval by the Texas Public Safety Commission (PSC) on Aug. 14, the Texas Department of Public Safety (DPS) announced the promotions of Majors Brian Baxter and Floyd T. Goodwin II to assistant chief positions within the department. Both promotions were effective Aug. 15, and both Baxter and Goodwin will be stationed at DPS’ Austin headquarters.

“We are pleased to have such a breadth of talent within DPS, and on behalf of the Public Safety Commission, I want to congratulate both of our new assistant chiefs, Brian Baxter and Floyd Goodwin, on their promotions,” said PSC Chairman Steven Mach. “These two have exhibited their abilities as strong leaders within the department, and I look forward to working with them as they take on their new roles.”

“The department is fortunate to have outstanding leaders with a plethora of knowledge like Baxter and Goodwin, and we are pleased to report their promotions to the role of assistant chiefs,” said DPS Director Steven McCraw. “These two men have dedicated their careers to protecting and serving their fellow Texans, and our state is grateful for their duty to public service.”

Brian Baxter, Assistant Chief, Training Operations Division
Baxter began his DPS career more than 27 years ago in 1993. First assigned to Traffic Law Enforcement at the Capitol District in Austin, Baxter would go on to serve on DPS’ Special Weapons and Tactics (SWAT) team and later as a narcotics sergeant in San Angelo. In 2007, Baxter promoted to narcotics lieutenant. Then in 2010, Baxter promoted to captain in the Criminal Investigations Division (CID) at DPS headquarters in Austin; he later returned to San Angelo to serve as the CID District 4B Commander. Baxter transferred to the Education, Training & Research (ETR) Division in 2015 to serve as the commander of the Tactical Training Center in Florence. While in Florence, Baxter was part of the team that developed DPS’ Tactical Emergency Casualty Care program, which now serves as a model for thousands of DPS commissioned officers. In 2018, Baxter promoted to major in ETR (now the Training Operations Division).

Baxter is a graduate of Northwestern University’s School of Police Staff and Command, the Texas Command College and the Force Science Advanced Specialist Course. He is an active member of the International Association of Human Trafficking Investigators, the Association of Force Investigators and a member of the International Association of Chiefs of Police. Baxter also holds an Emergency Medical Technician certification. He has also led several anti-human trafficking and child exploitation operations and served as an instructor for the Interdiction for the Protection of Children (IPC) program.

Floyd T. Goodwin II, Assistant Chief, Criminal Investigations Division
Goodwin first joined DPS in 1994 as a Texas Highway Patrol Trooper. He was stationed in Texas City before being promoted to narcotics sergeant in 2002. Goodwin worked narcotics in Bryan/College Station, Houston, Angleton and Texas City. In 2008, he was promoted to narcotics lieutenant in Austin. In 2011, he was promoted to CID captain in San Antonio and later transferred back to Austin as a CID captain. In 2016, Goodwin was promoted to CID major and oversaw CID’s Drug and Human Trafficking Program. Goodwin remained at Austin headquarters and became a CID major over administration in 2018.

In addition to his service with DPS, Goodwin is a graduate of Northwestern University’s School of Police Staff and Command. He has also completed the FBI Leadership Trilogy and holds a bachelor’s degree from Texas A&M University.