AUSTIN – The Texas Department of Public Safety (DPS) today dedicated its newest airplane, a Pilatus PC-12 NG, at a ceremony in Edinburg. The aircraft is being named in honor of the late Trooper Ernesto Alanis, who was struck and killed by a drunk driver while making a traffic stop near McAllen in February of 1983. Several members of Alanis' family attended the ceremony.

"Trooper Alanis was a man who took the DPS mission to heart and whose selfless service to this department and Texas will always be cherished, and his sacrifice will never be forgotten," said Public Safety Commissioner Cynthia Leon. "I am extremely honored to be part of such a special ceremony today, as we name this new aircraft in honor of Trooper Alanis to pay tribute to his life and service to our state."

"Texas State Trooper Ernesto Alanis made the ultimate sacrifice in his service to DPS and the State of Texas, and he was committed to protecting the communities in which he served, including the Rio Grande Valley where he was born and raised," said State Sen. Juan "Chuy" Hinojosa, vice-chair of the Senate Finance Committee. "It is a fitting tribute to him and his family that his spirit will live on forever in the dedication of this aircraft, named in his honor. The Ernesto Alanis will build on his legacy of protecting and serving the people of Texas."

The Pilatus, which accommodates as many as two pilots and seven passengers, can reach an altitude of 30,000 feet and travel as fast as 322 mph. Itfeatures state-of-the-art equipment, including an L-3 camera system with an infrared/color video camera, and a Churchill mapping system with the ability, for example, to map the area around a fire or assist in search and rescue operations. In addition, the plane is equipped with a variety of radios, and features technology that enables communication between several first responder agencies.

The Ernesto Alanis will be stationed in Edinburg, with primary duties of supporting law enforcement agencies along the Texas-Mexico border. This multi-purpose, fixed-wing airplane also will be used for a variety of public safety missions across Texas – including transporting medical equipment, supplies and response teams during a disaster; aerial observation support; and the capability to serve as an aerial command center. The aircraft was paid for with funding appropriated as a result of the 84th Legislative Session. 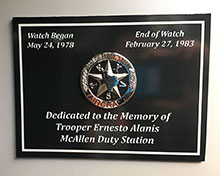 "This aircraft will honor Trooper Alanis' legacy for years to come by ensuring that DPS is even more prepared to protect and serve the great State of Texas," said DPS Director Steven McCraw. "Our aircraft have proven to be a force multiplier in combating a dynamic criminal element and in increasing the capabilities of DPS in all phases of emergency and law enforcement work –including assisting our law enforcement partners."

With the addition of this new airplane, operational since the first of the year, the DPS aircraft fleet now totals 24 – with nine planes and 15 helicopters committed to public safety missions. This is the second Pilatus airplane operated by the department. 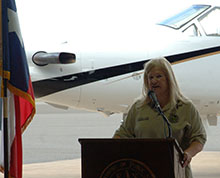