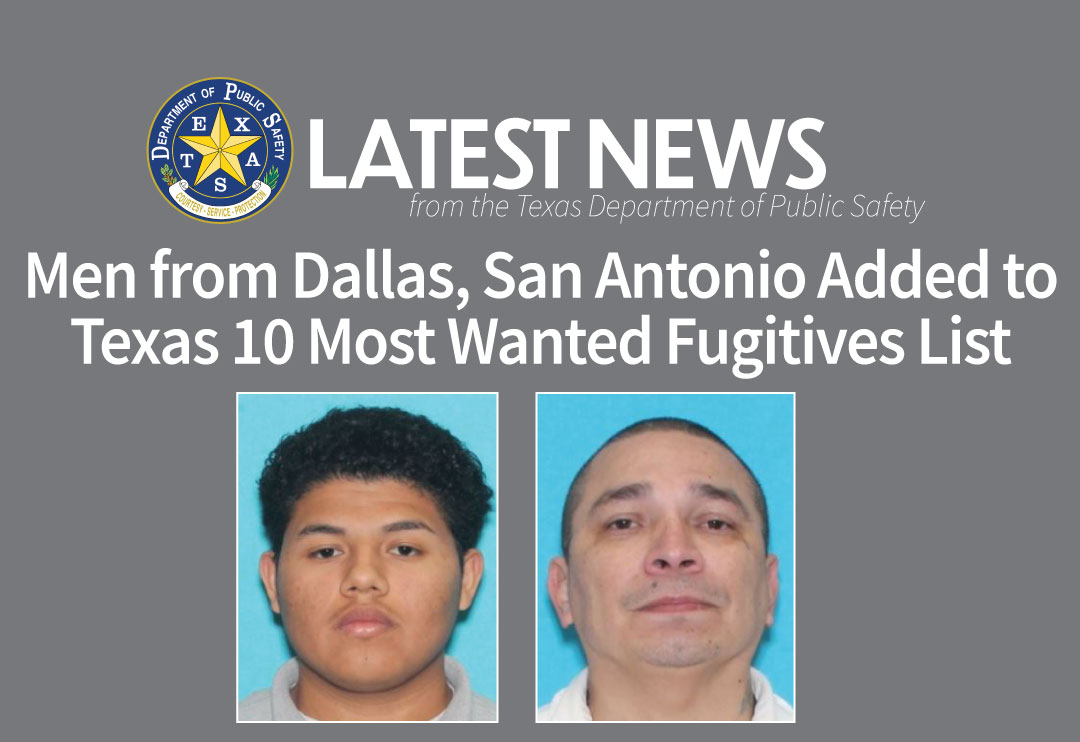 AUSTIN – The Texas Department of Public Safety (DPS) has added two men to Texas’ 10 Most Wanted Fugitives List. Alberto Mendoza and Moises Calderon are being sought, and cash rewards of up to $7,500 each are now offered for information leading to their captures. All tips are guaranteed to be anonymous.

Alberto Mendoza, 20, of Dallas, has been wanted since December 2020 for engaging in organized criminal activity and a parole violation. In 2016, Mendoza was convicted on four counts of aggravated assault with a deadly weapon and sentenced to eight years in a Texas Department of Criminal Justice (TDCJ) prison. He was released on parole in November 2018.

Mendoza is 5 feet 7 inches tall, weighs about 185 pounds and has a tattoo on his neck. For more information or updates in the event of his arrest, view his wanted bulletin.

Moises Calderon, 50, of San Antonio, is affiliated with the Hermandad de Pistoleros Latinos (HPL) gang. He’s been wanted since October 2020, after the Texas Board of Pardons and Paroles issued a warrant for violating his parole. He’s also wanted for assault causing bodily injury. In 1991, Calderon was arrested for murder and later convicted and sentenced to 40 years in a TDCJ prison. He was released on parole in November 2014.

Calderon is 5 feet 6 inches tall and weighs about 170 pounds. He has tattoos on his face, chest, abdomen, back, left shoulder, both arms, both wrists and right thigh. For more information or updates in the event of his arrest, view his wanted bulletin.

Texas Crime Stoppers, which is funded by the Governor’s Criminal Justice Division, offers cash rewards to any person who provides information that leads to the arrest of one of Texas’ 10 Most Wanted Fugitives or Sex Offenders. So far this year, DPS and other agencies have arrested 18 Texas 10 Most Wanted Fugitives and Sex Offenders, including six gang members and nine sex offenders. In addition, $23,500 in rewards has been paid for tips that yielded arrests.

To be eligible for cash rewards, tipsters MUST provide information to authorities using one of the three following methods: