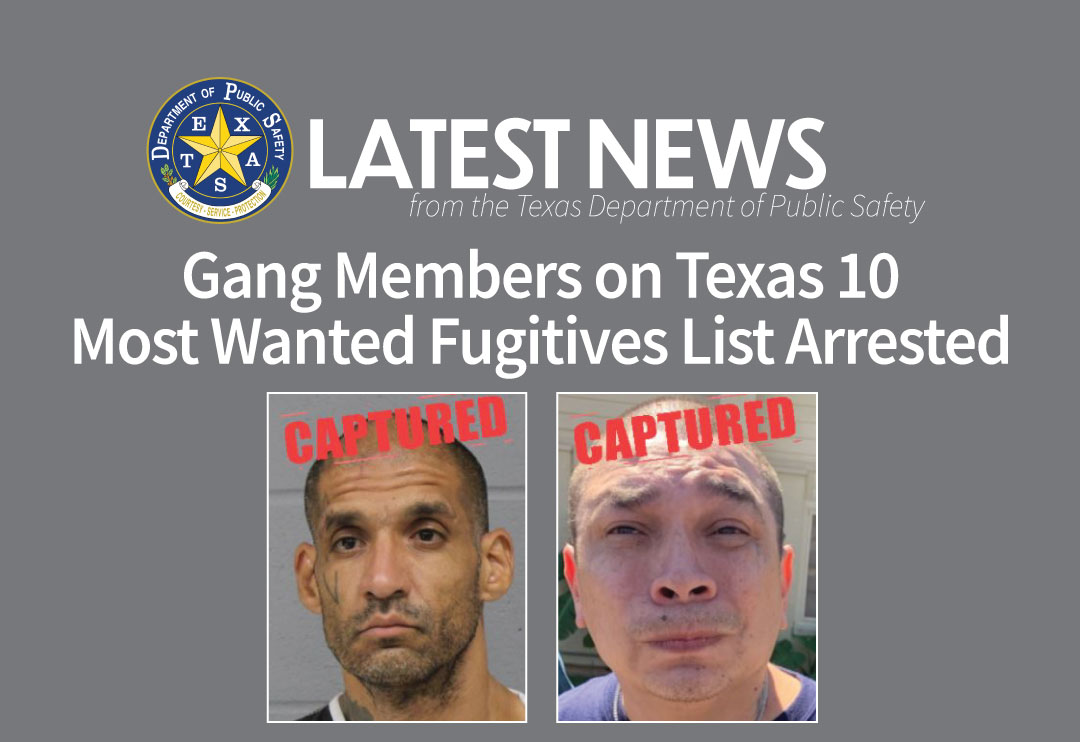 AUSTIN – Two of Texas’ 10 Most Wanted Fugitives are back in custody after being arrested this week. Edward De Los Santos was captured Sept. 22 in Austin, and Moises Calderon was captured Sept. 23 in San Antonio. Both arrests were the results of tips and Crime Stoppers rewards will be paid.

Edward De Los Santos, 43, of Austin, was arrested at a hotel in south Austin by members of the U.S. Marshals Lone Star Fugitive Task Force, including Texas Department of Public Safety (DPS) Special Agents and officers from the Austin Police Department. He was added to the Texas 10 Most Wanted Fugitives List on Sept. 2 and is affiliated with the Tango Blast gang.

De Los Santos was wanted for continuous violence against the family, assault with injury, possession of a controlled substance and evading arrest/detention with a vehicle. De Los Santos was previously convicted on multiple counts of aggravated assault, burglary of a habitation and aggravated robbery with a deadly weapon. For more information view his captured bulletin.

Moises Calderon, 51, of San Antonio, was arrested at an apartment complex in west-central San Antonio by members of the U.S. Marshals Lone Star Fugitive Task Force, including DPS Special Agents. Providing assistance in the investigation was the Texas Department of Criminal Justice Office of Inspector General, the Office of the Attorney General, the Bexar County Sheriff’s Office, Immigration and Customs Enforcement and the Naval Criminal Investigative Service-Dallas. Calderon was added to the Texas 10 Most Wanted Fugitives List on Sept. 8 and is affiliated with the Hermandad de Pistoleros Latinos (HPL) gang.

Calderon has been wanted since October 2020, after the Texas Board of Pardons and Paroles issued a warrant for violating his parole. He was also wanted for assault causing bodily injury. In 1991, Calderon was arrested for murder and later convicted and sentenced to 40 years in a Texas Department of Criminal Justice prison. He was released on parole in November 2014. For more information view his captured bulletin.

Texas Crime Stoppers, which is funded by the Governor’s Criminal Justice Division, offers cash rewards to any person who provides information that leads to the arrest of one of Texas’ 10 Most Wanted Fugitives or Sex Offenders. So far this year, DPS and other agencies have arrested 20 of Texas’ 10 Most Wanted Fugitives and Sex Offenders, including eight gang members and nine sex offenders. In addition, $38,500 in rewards has been paid for tips that yielded arrests.