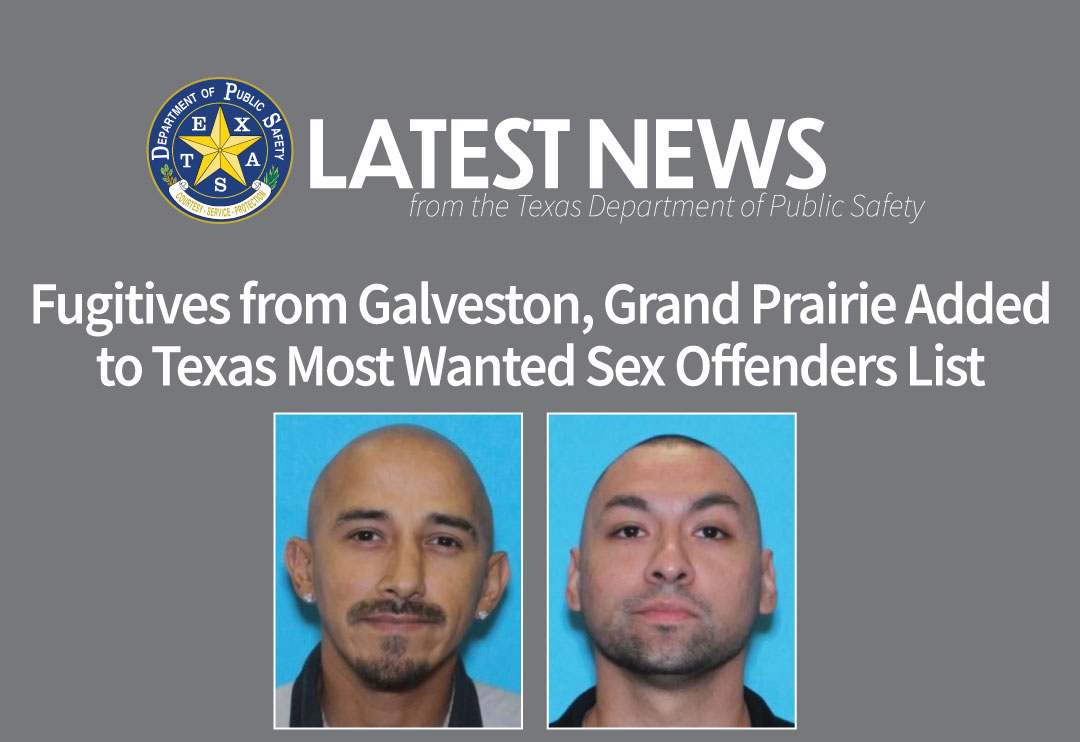 AUSTIN – The Texas Department of Public Safety (DPS) has added two men to Texas’ 10 Most Wanted Sex Offenders List. Joe Louis Hernandez, of Galveston, and Gregory Jon Pecina Jr., of Grand Prairie, are being sought. Crime Stoppers is offering a cash reward of up to $5,000 for Hernandez’s arrest, and up to $3,000 for Pecina. All tips are guaranteed to be anonymous.

Joe Louis Hernandez, 44, has been wanted since January 2021, when the Galveston Police Department issued a warrant for failure to comply with sex offender registration requirements.

Hernandez is 5 feet 5 inches tall and weighs about 130 pounds. He has tattoos on his back, chest, left arm and hand, abdomen and right leg. In addition to Galveston, he has ties to Houston. For more information or updates in the event of his arrest, view his wanted bulletin.

Gregory Jon Pecina Jr., 37, has been wanted since November 2020, when the Dallas County Sheriff’s Office issued warrants for Pecina’s arrest for aggravated assault causing serious bodily injury, aggravated robbery and kidnapping. In December 2020, the Texas Board of Pardons and Paroles issued a warrant for his arrest for a parole violation. In April 2021, the Grand Prairie Police Department also issued a warrant for Pecina’s arrest for failure to register as a sex offender.

In 2014, Pecina was convicted of aggravated sexual assault of a child following an incident with a 13-year-old girl. He was sentenced to eight years in a TDCJ prison and paroled in September 2019.

Pecina is 5 feet 9 inches tall, weighs about 180 pounds and has a scar on his back. In addition to Grand Prairie, he also has ties to Granbury. For more information or updates in the event of his arrest, view Pecina’s wanted bulletin.

Texas Crime Stoppers, which is funded by the Governor’s Criminal Justice Division, offers cash rewards to any person who provides information that leads to the arrest of one of Texas’ 10 Most Wanted Fugitives or Sex Offenders. So far in 2022, DPS and other agencies have arrested five Texas 10 Most Wanted Fugitives and Sex Offenders, including one gang member and three sex offenders. In addition, $6,000 in rewards has been paid for tips that yielded arrests.