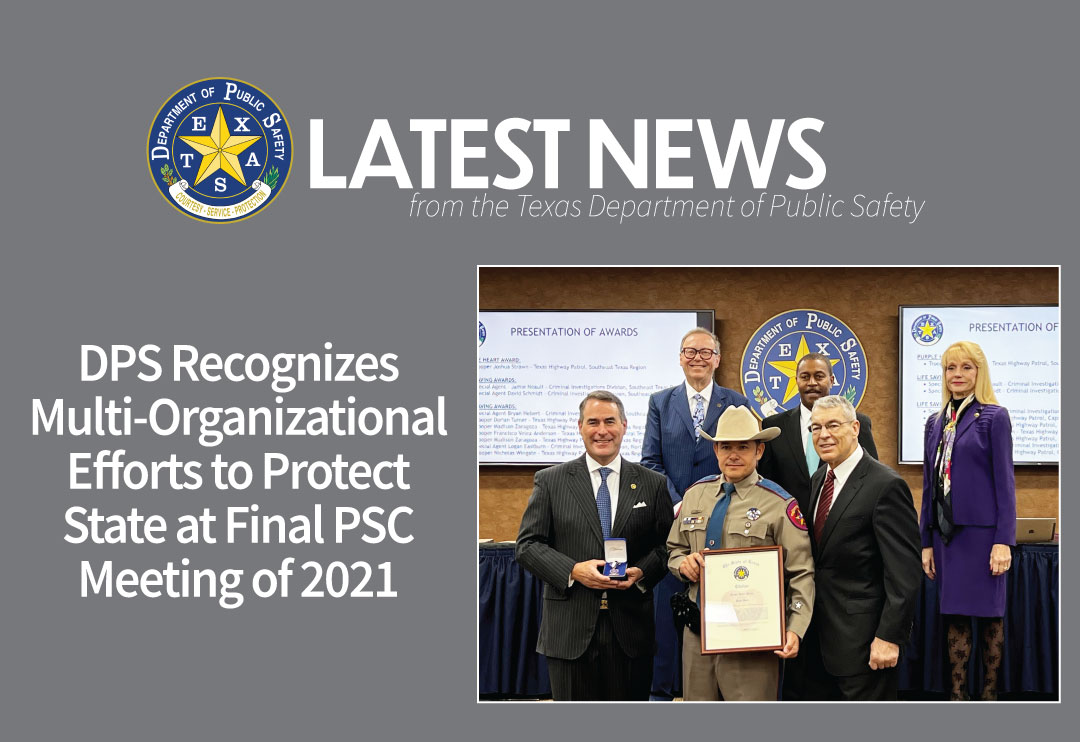 AUSTIN – The Texas Public Safety Commission (PSC) along with Texas Department of Public Safety (DPS) Director Steven McCraw awarded 17 Lifesaving Awards; one Unit Citation; and one Purple Heart to department personnel at the PSC meeting on Thursday, Dec. 9, at DPS Headquarters in Austin. Ten Director’s Awards were also presented to members of partner agencies at the meeting.

“I’m honored to recognize the outstanding work that was done by the people within DPS and our partner agencies,” said DPS Director Steven McCraw. “These individuals have shown that commitment to law enforcement yields results that help protect the people of Texas. You may be on the job a few days, or you may be working on an investigation for years, but the dedication you show to the community and the people of this great state is always rewarded by the citizens. We are grateful to have these individuals with this type of moral fiber and dedication serving our state.”

Trooper Joshua Strawn, Highway Patrol — Freeport, received a Purple Heart; and Special Agent Jamie Neault, Criminal Investigations Division — Houston, and Special Agent David Schmidt, Criminal Investigations Division — Beaumont, each received a Lifesaving Award for their actions on Aug. 18. That day Strawn was assisting the DPS Special Response Team and the Burleson County Sheriff’s Office with a barricaded person at a home in Caldwell. The person left the house with a handgun and fired two rounds then fell to the ground, appearing incapacitated. As Strawn and another Trooper approached, the person rolled over, pulled out a handgun and fired twice at Strawn. Troopers returned fire, shooting and killing the suspect. Neault saw Strawn bleeding from his right arm and helped move him to safety. Schmidt applied a tourniquet to Strawn’s arm to stop the bleeding. Neault assessed Strawn and discovered another gunshot wound on his upper right thigh. EMS personnel took Strawn to the hospital for treatment.

Special Agent Bryan Hebert, Criminal Investigations Division — Texas City, received a Lifesaving Award for his actions on July 29. He was working with the Galveston County Sheriff’s Office and the U.S. Marshals to find felony fugitives in and around Galveston County. While searching an apartment complex, Hebert and deputies found an unresponsive 23-year-old woman. Suspecting she had overdosed, Hebert retrieved NARCAN from his DPS vehicle. When he returned to the woman, he assessed her and found a faint pulse and slow respiration rate. Visible signs of recent intravenous drug use was found on her arms and a used syringe was found nearby. Hebert administered the NARCAN and then performed a sternum rub. The woman immediately regained consciousness, and her breathing and pulse rate increased. Hebert monitored her pulse and respiration, staying with her until EMS arrived.

Trooper Dorian Turner, Highway Patrol — Capitol, received a Lifesaving Award for his actions on Sept. 10. He was helping at a TxDOT homeless camp when a woman ran toward him, holding a hand on the back of her neck. When she got closer to Turner, he could see a large amount of blood on her chest. The woman said a person at the camp struck her with an axe. Turner assessed the woman’s injury and saw a deep laceration to the back of her neck that was bleeding profusely. He used a towel to apply pressure to the wound, however, the bleeding continued. Turner applied a “Quick Clot” bandage and continued applying pressure until EMS arrived. He accompanied the woman to the hospital to maintain pressure on the wound. The woman survived.

Trooper Madison Zaragoza, Highway Patrol — Belton, received a Lifesaving Award for his actions on May 20. On that date he and Trooper Juan De La Garza were notified of four people who appeared to be in distress and discovered three men and a woman in the southbound shoulder of the highway. One of the men appeared to be suffering from malnutrition and dehydration. The Troopers asked for assistance from EMS and Border Patrol, then put the man in De La Garza’s patrol vehicle to cool him off. A few minutes later the man stopped breathing. Troopers immediately removed him from the vehicle, Zaragoza got his CPR rescue mask while De La Garza began performing chest compressions. The man began breathing again but remained unresponsive. Other Troopers arrived and provided shade to the victim and tried to lower his body temperature using wet towels. After a few minutes the victim stopped breathing again, so De La Garza and Zaragoza resumed CPR until the victim began breathing on his own. The Troopers monitored the victim until EMS arrived. (Trooper Juan De La Garza was honored at the October PSC meeting.)

Cpl. Francisco Velez-Anderson, Highway Patrol — Waco, and Trooper Madison Zaragoza, Highway Patrol — Belton, each received a Lifesaving Award for their actions on March 14. Velez-Anderson and Trooper Stephen Jeter were the first to arrive on the scene of a one-vehicle crash on Interstate 35 and found two people performing CPR on an unresponsive man. The Troopers immediately took over. Trooper Jacob Buskohl soon arrived and the trio took turns performing chest compressions. Officers with the Lacy Lakeview police arrived and assisted with CPR and provided scene security, and officers with Texas State Technical College provided an Automated External Defibrillator (AED). Buskohl attached the AED and monitored the victim. Zaragoza arrived at the scene and assisted with CPR. EMS arrived and continued medical care, and the victim regained a pulse and was breathing on his own before he was taken to a hospital. (Troopers Jacob Buskohl and Stephen Jeter were honored at the October PSC meeting.)

Special Agent Logan Eastburn, Criminal Investigations Division — Amarillo, and Trooper Nicolas Wingate, Highway Patrol — Devine, each received a Lifesaving Award for their actions on Jan. 26. Pleasanton police officers were involved in a pursuit, and Eastburn and Wingate overheard officers state shots were fired at them from the fleeing vehicle. The pair joined the effort to stop the suspect. Another Trooper successfully deployed spikes to disable the vehicle, however the driver continued to drive while streaming the event on social media. As the pursuit ended near an elementary school in San Antonio, shots were exchanged between officers and the suspect, wounding him. Wingate approached the scene with his department-issued rifle and mass trauma medical kit, moving toward the suspect. Eastburn also advanced on the scene, communicating with officers while shots were fired. The pair administered CPR and provided medical care for the suspect. They bandaged his head injury, secured his airway with a nasal cannula to deliver oxygen and administered an IV. They provided care until EMS arrived. The suspect did not survive his injuries, but Eastburn and Wingate’s actions allowed medical personnel to continue care, permitting the donation of organs to eight people.

Special Agent Jamie Neault, Criminal Investigations Division — Houston; Trooper Daniel Godina, Highway Patrol — Jourdanton; Trooper Taylor Henriquez, Highway Patrol — Eagle Pass; Ranger Andres de la Garza, Texas Rangers Division — Centerville; Ranger Pete Luna Jr., Texas Rangers Division — Richmond; and Staff Sgt. Lucas Patterson, Texas Rangers Division — Austin, each received a Lifesaving Award for their actions on Sept. 12 as part of Operation Lone Star (OLS). Luna, de la Garza, Neault, Godina and Henriquez were conducting searches for migrants at a railyard. The team was flagged down by two migrants who were visibly shaken and had blood on their clothes. They told de la Garza and Patterson that a person had been struck by a train. De la Garza and Patterson located the victim next to the track. His right leg was amputated below the knee and he was losing a large amount of blood. De la Garza notified the rest of the team to come to the area and Neault, who is a tactical medic, requested an air ambulance. The pair applied two tourniquets to the victim’s upper leg and treated him for shock. As Neault arrived, he administered IV fluids to stabilize him. Luna, Godina and Henriquez prepared to transport him to the helipad, and the team then took him there. Neault continued care until the aircrew arrived and the victim was turned over to EMS personnel. (Patterson was unable to attend Thursday’s PSC meeting.)

Trooper Brandon Blessing, Highway Patrol — Weslaco and Sgt. Mark Matlock, Highway Patrol — Port Lavaca, each received a Lifesaving Award; and Warden Travis Haug and Warden Shane Horrocks both with Texas Parks and Wildlife, and Officer Marcin Trawinski and Officer Matthew Nasworth, both with Florida Fish and Wildlife Conservation Commission, each received a Director’s Award for their actions on Aug. 14 as part of Operation Lone Star (OLS). The Highway Patrol Tactical Marine Unit was working with officers from the Florida Fish and Wildlife Conservation Commission and the Texas Parks and Wildlife Marine Tactical Operations Group on the Rio Grande. Border Patrol stated a group of migrants appeared to be struggling to cross the river. The first responding officers saw two women drowning. Haug and Trawinski pulled one of the women, who had a duffel bag on her back, into their boat. Matlock helped the second woman, who had a child strapped to her chest and was underwater. Matlock freed the child and got it into the boat. Trawinski and Matlock then pulled the second woman into the boat. Additional officers arrived and saw a small girl floating face down into the river. Blessing jumped into the water and Horrocks moved the boat to assist. Blessing handed the child to Nasworth, who laid her in the boat and began chest compressions. Blessing and Nasworth continued compressions and rescue breathing. After three rounds, the child expelled water and began to breathe on her own, but then went unconscious. Blessing monitored her vitals until she opened her eyes. At the boat ramp, the child was taken to a patrol unit until EMS arrived. (Nasworth was unable to be at Thursday’s PSC meeting.)

Officer Colton Walch, Bryan Police Department, received the Director’s Award for his actions on June 30. The Leon County Sheriff’s Office dispatched that there was a one-vehicle roll-over wreck. Walch, then still a cadet with the police department and did not have any formal first aid training, drove upon the crash site before police, fire and EMS arrived and found four people in the crash. Walch found one person ejected in the road, two still trapped in the vehicle and the fourth person underwater in a creek. Walch immediately went to the creek and pulled the victim to safety, after which she was able to breathe on her own. Walch saw the woman had head and leg injuries and remained by her side until medical personnel arrived and took her to a hospital.

We congratulate all of the above award recipients and thank them for their tremendous work.