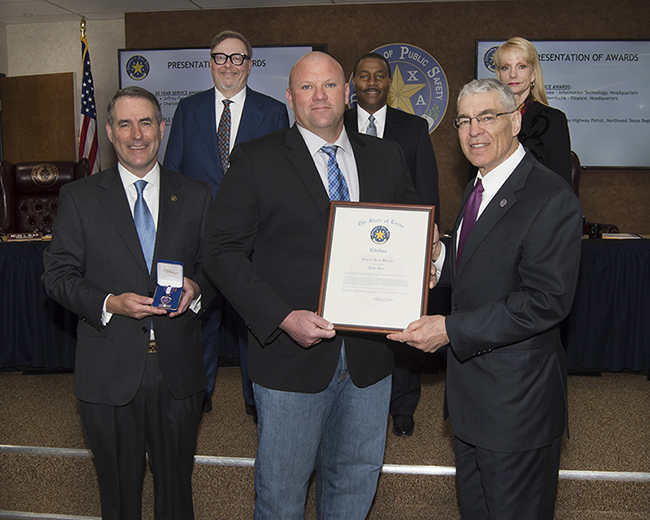 AUSTIN – The Texas Public Safety Commission (PSC) along with Texas Department of Public Safety (DPS) Director Steven McCraw presented one Purple Heart and eight Lifesaving Awards to members of the Texas Highway Patrol at the PSC meeting on Thursday, Feb. 11, at the DPS Headquarters in Austin.

“The Texas Highway Patrol has highly-trained, outstanding men and women who embody the DPS motto of courtesy, service, protection, while doing extraordinary things on a daily basis,” McCraw said. “I’m proud to recognize the DPS Troopers today who selflessly went into dangerous situations in order to serve people throughout Texas, saving lives in the process. It’s a privilege to recognize them for their heroic actions.”

The following DPS personnel were recognized at the Thursday meeting:

Sgt. Jerrod Burtnett, Highway Patrol — Lubbock, received a Purple Heart for his actions on Dec. 27, 2019. Burtnett, then a Trooper, was investigating a series of crashes due to zero visibility fog in Lubbock County. Burtnett had just finished checking on a bystander along the side of the road, when a fast moving tractor-trailer lost control and struck another vehicle. The tractor-trailer went into the ditch, hitting more vehicles as well as Burtnett, causing him serious injury. After a series of surgeries, he continues to improve. Burtnett was presented a Purple Heart in recognition of his courageous service and personal sacrifice.

Trooper Jeremy Amis, Highway Patrol — Waco, received a Lifesaving Award for his actions on April 15, 2020. Amis overheard radio traffic from the McLennan County Sheriff’s Office about a possible suicidal person in Lorena and went to the scene. Upon arrival, he found the person with a knife to his throat. When the person asked for a cigarette, the Trooper located a cigarette and lighter, tossing both just far enough away that he had to move. When the subject went to light the cigarette, he lowered the knife. Amis seized the chance and was able to pin the person’s wrists to the ground, while other officers removed the knife and took him into custody.

Trooper Chad Brooks, Highway Patrol — Pampa, received a Lifesaving Award for his actions on Aug. 29, 2020. Brooks was eating at a café when he heard a commotion at a nearby table. Brooks saw a 2-year-old boy choking and the child closed his eyes and went limp. Brooks immediately jumped up and asked the mother for the child and laid him facedown over his leg, striking the boy on his back. As a result, a large piece of food was ultimately dislodged from the little boy’s mouth, and he took a gasp of air and began to cry. Brooks ensured the child was alright before returning him to his mother.

Trooper Roy Haley, Highway Patrol — McKinney, received a Lifesaving Award for his actions on Jan. 20, 2020, when he responded to a domestic disturbance in Collin County. An elderly woman had been stabbed by her son. Haley saw she was losing a significant amount of blood due to the wound in her arm, so he removed the woman’s jacket and applied a tourniquet from his duty belt. Noticing a wound to the woman’s neck, he used gauze from another officer on the scene and applied pressure, which helped reduce the blood loss. The woman was taken by EMS to a local hospital, where she fully recovered.

Trooper Samuel Perez, Highway Patrol — Mission, received a Lifesaving Award for his actions on Aug. 2, 2020, when he attempted a traffic stop on two people on an ATV. The driver refused to stop and continued at a high rate of speed, passing other vehicles illegally. Eventually, the driver lost control and crashed, causing him and his passenger to be ejected. The driver suffered a large wound on his left arm that was bleeding extensively. Perez immediately applied a tourniquet to stop the bleeding. The tourniquet likely saved the man’s arm and possibly his life.

Trooper William Robbins, Highway Patrol — Greenville, and Trooper Cody Sagnibene, Highway Patrol — Greenville, each received a Lifesaving Award for their actions on Aug. 8, 2020. The two Troopers were called to assist the Royce City Police Department after a motorcycle crashed into a guardrail. When Robbins and Sagnibene arrived they found the motorcyclist’s foot was severed. At this point, there had not been any pressure applied to the injured leg. Sagnibene and Robbins worked together to apply a tourniquet and provide medical treatment until EMS arrived.

Trooper (Jonathan) Daniel Britton, Highway Patrol — Queen City, and Trooper Wayne Johnson, Highway Patrol — Linden, each received a Lifesaving Award for their actions on April 5, 2020. Johnson was informed by the Atlanta Police Dispatch that a woman was in cardiac arrest near a Texas/Louisiana COVID-19 checkpoint on U.S. 77. Johnson phoned Britton, who was able to locate an elderly woman who wasn’t breathing and had no pulse. Britton began chest compressions until Johnson arrived; then together, they continued lifesaving measures. The woman eventually regained a pulse and began breathing. EMS arrived and took her to a hospital. She was expected to make a full recovery.