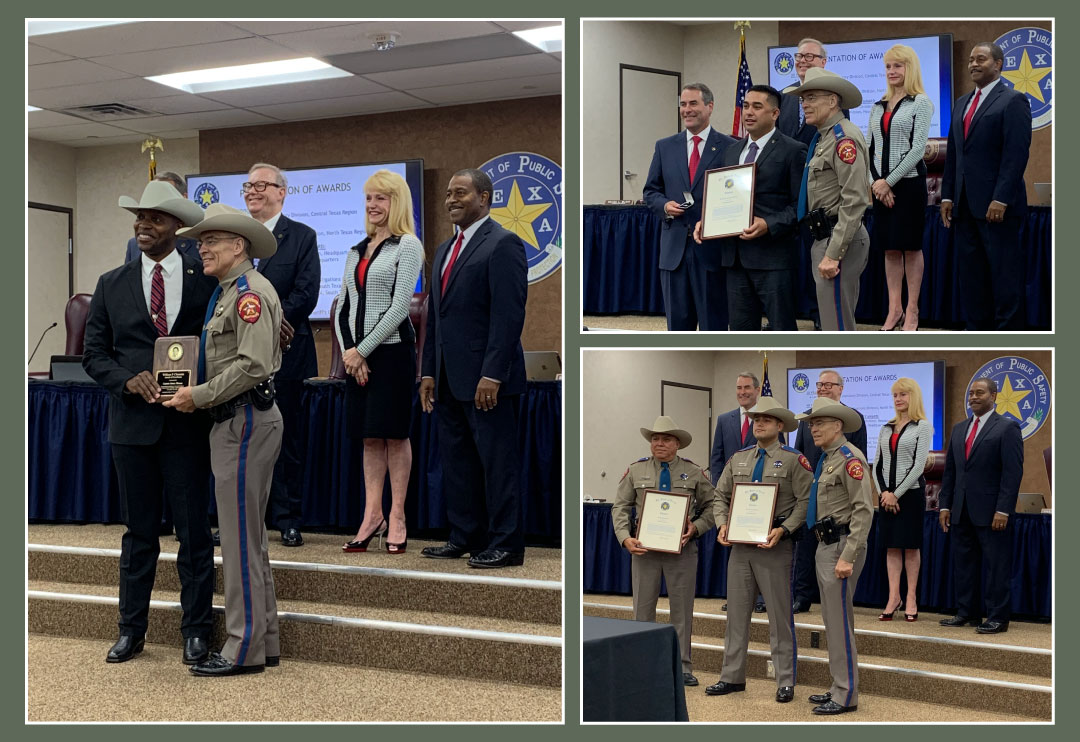 AUSTIN – The Texas Public Safety Commission (PSC) along with the Texas Department of Public Safety (DPS) Director Steven McCraw presented two Adolph Thomas Distinguished Service Awards and three Lifesaving Awards to department personnel at the PSC meeting on Thursday, June 10, at DPS Headquarters in Austin. One Director’s Award was also presented to a member of a partner agency at the meeting.

“The selfless devotion they have shown to their law enforcement agencies and their communities make Texas a better place to call home,” said DPS Director Steven McCraw. “These individuals recognized today are to be commended for their dedication and their actions.”

Michael Harper, Training Operations Division (TOD) — Austin, and Capt. James Thomas, Rangers Division — Austin, each received the Adolph Thomas Distinguished Service Award, which is given annually to one commissioned and one non-commissioned employee. First awarded in 2018, this award is named after Adolph Thomas, the first Black DPS Trooper. Thomas worked in the Texas Highway Patrol, Narcotics, served as Commander of the Training Academy and retired as Chief of Staff Services. Thomas excelled in the areas of mentoring fellow employees, training others and civic engagement. This award was created to honor DPS employees who display excellence and distinguish themselves in those same three areas.

Michael Harper serves as a program supervisor in TOD. Since joining DPS in 2018, he has made a significant impact on the overall health and fitness of the agency, as well as the many people he has instructed. Before joining DPS, Harper served with the internationally recognized Cooper Institute in Dallas for nearly a decade and was the Associate Director for First Responder Physical Fitness and Assessment. In addition, Harper has presented and instructed across the U.S. and throughout the world. His philosophies and programs have helped numerous law enforcement agencies improve the physical, mental and overall health of their personnel. Harper has also served as a volunteer for the American Legion Boys State Association for 22 years, helping high school students become involved in local and state government.

James Thomas has been with DPS since 2001. He served with the Texas Highway Patrol for nine years before being promoted to special agent within the Criminal Investigations Division. Thomas was also selected to be a member of the Southeast Texas Regional Special Response Team, where he was a tactical operator in high-risk situations and critical incidents. In 2013, Thomas was appointed as a Special Deputy Marshal with the U.S. Marshals Service and was assigned to the Gulf Coast Violent Offenders Task Force. Two years later he was promoted to the Texas Rangers. In 2018, he was promoted to the rank of lieutenant, before being promoted again to captain. Thomas has received several commendations and citations while in law enforcement. In 2014, he earned his doctoral degree in educational leadership, making him the only known Texas Ranger with this distinction. During his time at DPS, Thomas has served as a leader and mentor and is also an adjunct professor for New Mexico State University.

Special Agent Angel Martinez, Criminal Investigations Division (CID) — El Paso, received a Lifesaving Award and Deputy Jack Baker, Culberson County Sheriff’s Office, received a Director’s Award for their actions on Jan. 19, 2021. Martinez was driving on IH-10 that night when he came across a pedestrian who had been struck by a vehicle. Martinez immediately stopped to give first aid and saw the pedestrian was bleeding severely. Baker arrived soon after Martinez, and the pair applied a tourniquet to the victim’s leg, which stopped the arterial bleeding. Both officers monitored the patient and kept him alert until EMS arrived. Martinez and Baker assisted with immobilizing and loading the patient into the ambulance, and he was transported for further treatment. EMS personnel said the tourniquet helped save the victim’s life.

Trooper Mario Rios, Highway Patrol — Edinburg, and Trooper Enrico Salinas, Highway Patrol — Edinburg, each received a Lifesaving Award for their actions on Dec. 5, 2020. Salinas was on patrol that day when he saw a large cloud of dust and what appeared to be a crash on the overpass of U.S. 281. When he arrived on the scene he spotted a wrecked vehicle and a man sitting on the guardrail. The man was bleeding profusely from his left leg and had massive injuries to his foot. After checking for additional injured passengers in the vehicle, Salinas applied his tourniquet to the man’s upper thigh. While doing so, the man intermittently lost consciousness. Rios then arrived on the scene and applied bandages to the man’s injuries. The two Troopers cared for the patient until EMS arrived. Without the aid of Rios and Salinas the man’s injuries would have been fatal. 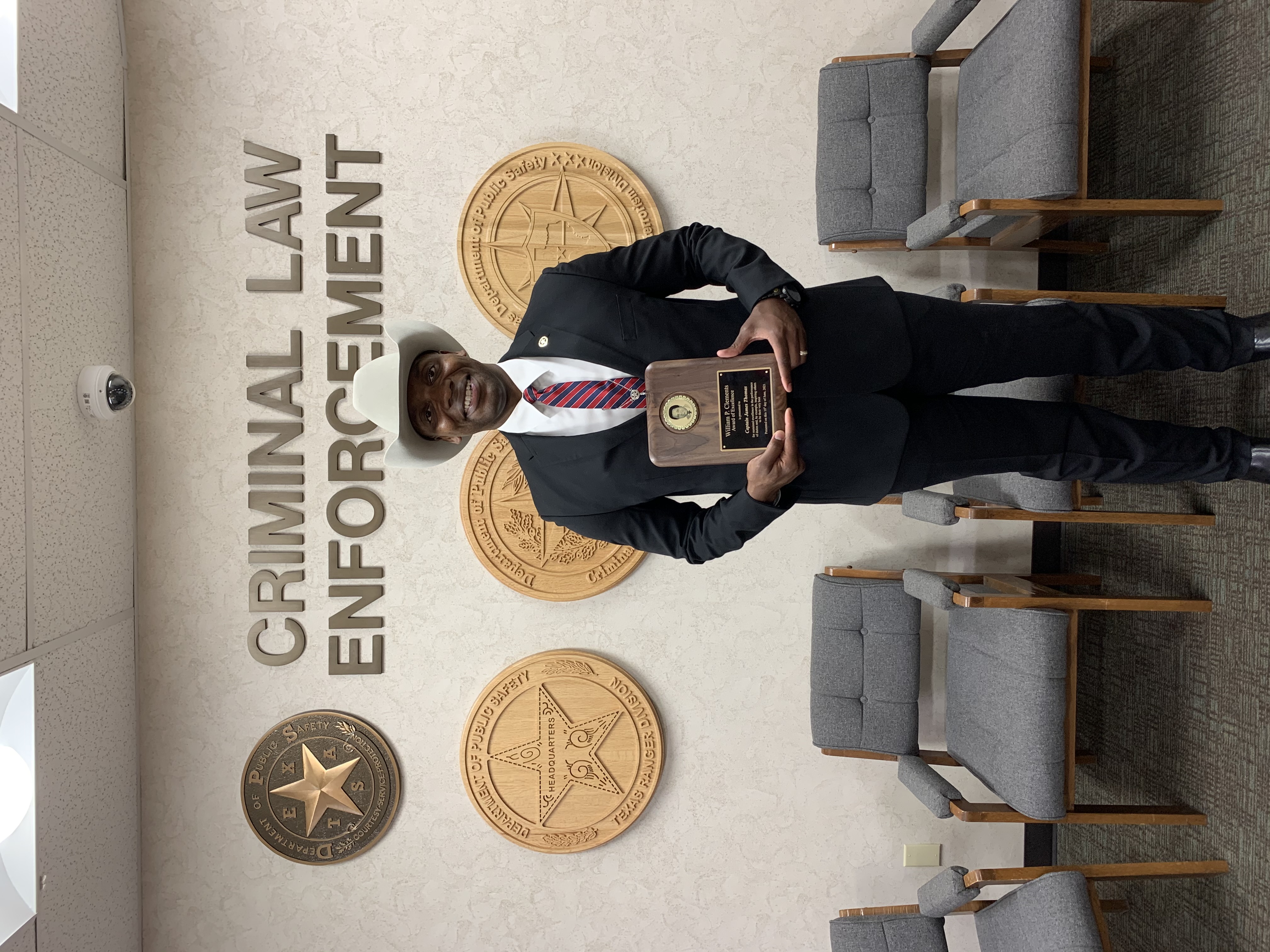 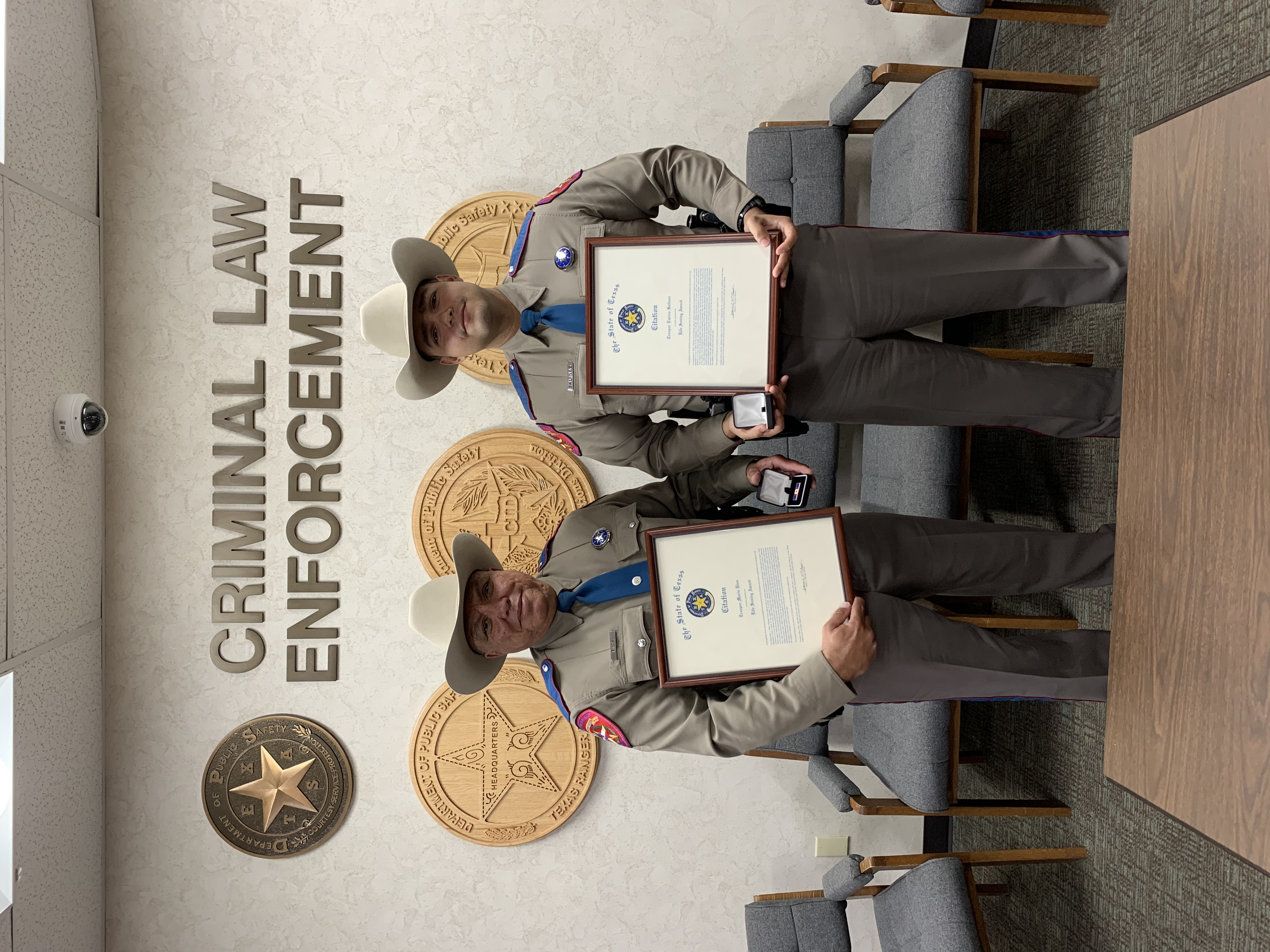 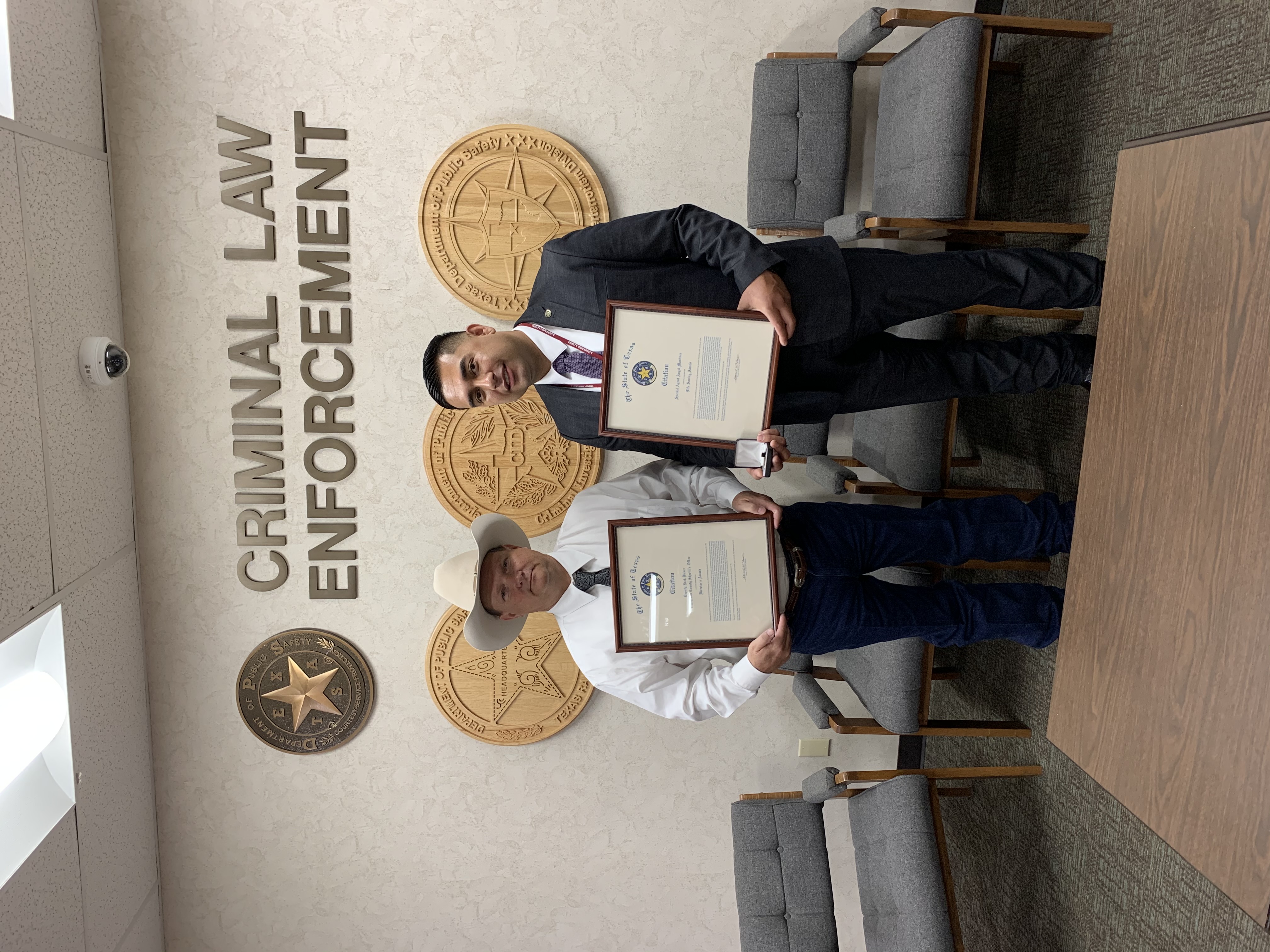