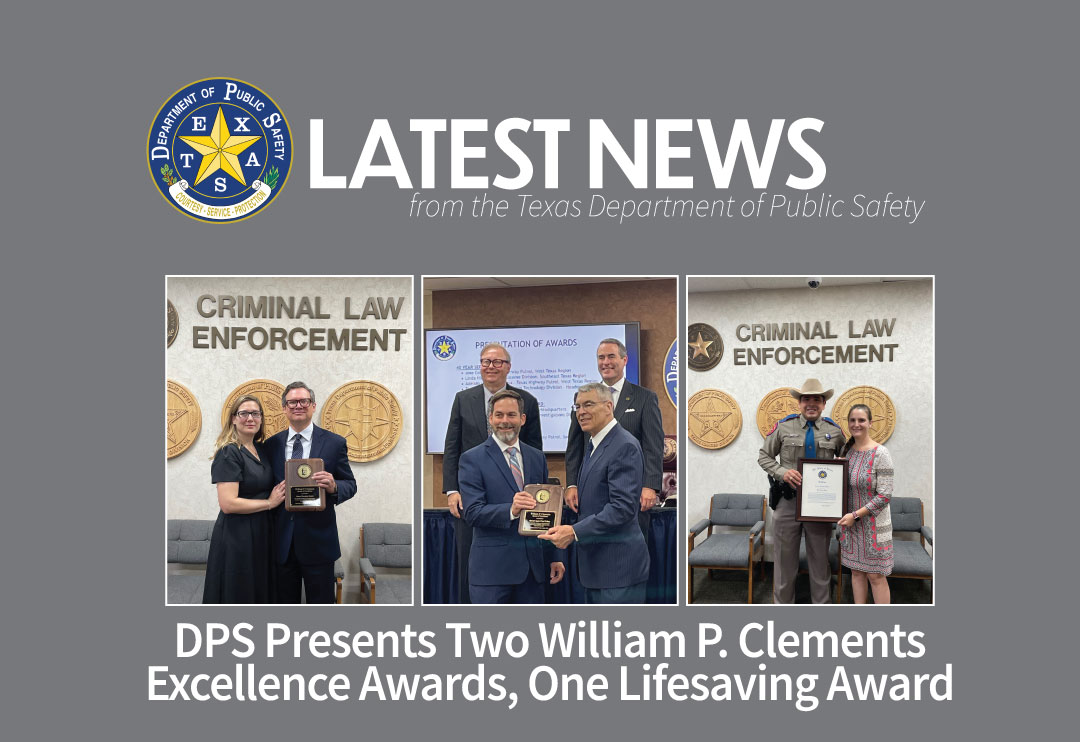 AUSTIN – The Texas Public Safety Commission (PSC), along with Texas Department of Public Safety (DPS) Director Steven McCraw, presented two William P. Clements Excellence Awards and one Lifesaving Award to members of the department at the PSC meeting on Thursday, April 29, at the DPS Headquarters in Austin.

“These awards are a shining example of the tremendous work that happens in so many divisions, by so many incredible people at DPS each and every day,” said DPS Director Steven McCraw. “I’m proud to honor the innovation, leadership and commitment displayed by these three individuals who are dedicating their lives to serving the people of this great state.”

The William P. Clements Excellence Award is named in honor of the former governor and his commitment to excellence in government. The award honors a commissioned and non-commissioned employee for their exceptional performance of duties throughout the course of their DPS careers. Strategic Planner Brandon Gentry, Homeland Security–Headquarters, Austin, and Special Agent Chad Poling, Criminal Investigations Division–Denton, each received a 2021 William P. Clements Excellence Award.

Brandon Gentry began his career with DPS in 2017. As a strategic planner in Homeland Security Operations, his outstanding leadership has led to significant growth and improvement in the Bomb-Making Materials Awareness Program. Gentry has provided guidance to partner agencies regarding the development of the Complex Coordinated Terrorist Attack Toolkit, which has helped the state prepare for a possible terrorist attack. Gentry also plans, coordinates and oversees workshops for airport security personnel throughout the state. Additionally, Gentry has worked with the Councils of Government to assess its preparedness and plan for implementation of the state’s Homeland Security Strategic Plan. Gentry’s forward-thinking and identification of potential threats spurred him to reach out to the Department of Health and Human Services in 2019 to discuss possible public health and medical supply chain issues after identifying potential shortfalls. During the COVID-19 pandemic, he has worked diligently to rectify those issues. A team player who performs beyond expectations, his dedication and commitment are exemplary and worthy of commendation.

Chad Poling began his career with DPS in 1997 as a Texas Highway Patrol Trooper. In 2002, he was promoted into the Criminal Investigations Division, and has focused on dismantling large-scale criminal enterprises and drug trafficking organizations with direct ties to Mexican drug cartels. Poling has served as lead case agent for several major investigations, and due to his knowledge, experience and leadership, his investigations have resulted in the seizure of more than $5 million in U.S. currency and property, more than 300 kilograms of cocaine, methamphetamine and heroin, and multiple vehicles. These investigations have also led to more than 160 federal indictments and the arrest of 140 defendants. Throughout his career, Poling has demonstrated the highest level of professionalism, initiative, teamwork and dedication, both on and off duty. He is an active mission volunteer who has made several trips to Canada, Vietnam and France in service of others.

In addition to the two William P. Clements Excellence Awards, one Lifesaving Award was also given.

Jonathan Macias, Texas Highway Patrol–Centerville, received a Lifesaving Award for his decisive and quick actions on May 4, 2020. Trooper Macias was dispatched to a crash involving a semi and a pickup truck hauling a utility trailer. Dispatchers advised that the driver of the pickup was trapped against a tree and losing blood quickly. As Trooper Macias arrived on the scene, he quickly assessed the victim and noticed a large amount of blood on the driver side floor board, air bags and roof of the vehicle. He immediately retrieved his tourniquet. Not wanting to move or adjust the driver’s leg in order to prevent further injury, Trooper Macias requested assistance from a firefighter on the scene, and together, they were able to successfully apply the tourniquet. The driver was airlifted to a hospital for additional medical attention.