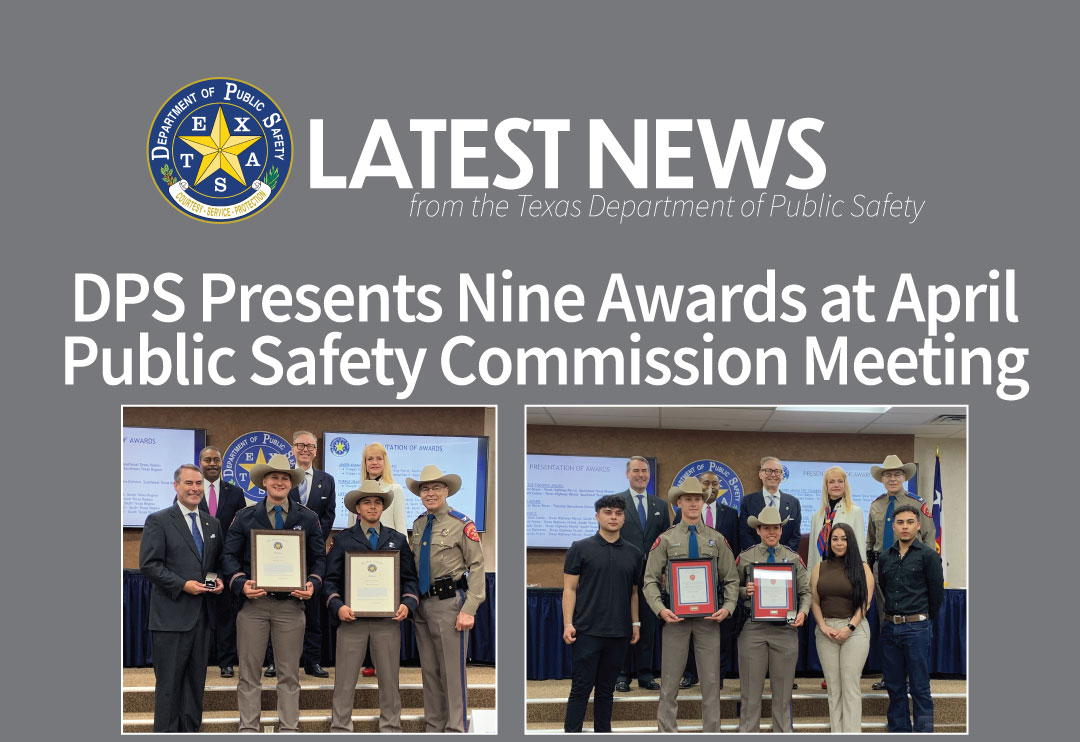 AUSTIN – The Texas Public Safety Commission (PSC), along with the Texas Department of Public Safety (DPS), presented two Javier Arana Top Trooper Awards, five Lifesaving Awards, one Unit Citation and one Purple Heart at the PSC meeting on Thursday, April 14, at the DPS Headquarters in Austin.

“I am proud to recognize the great work being done to keep Texas safe,” said DPS Director Steven McCraw. “These individuals stand out due to their training, persistence and devotion to protecting our great state. I’m pleased to be able to honor their work today.”

Trooper Juan Rojas Tovar, Training Operation Division (TOD) — Conroe, received a Purple Heart for his actions on April 8, 2021, after a shooting at the Kent Moore Cabinets manufacturing facility in Bryan. Following the incident, several law enforcement agencies searched for the suspected gunman and Tovar went to the suspect’s last known address in Grimes County. Upon arrival, he saw the man in front of the house with a high-powered rifle. Tovar immediately backed his vehicle away, however the suspect opened fire. One round went through Tovar’s patrol vehicle, seriously injuring him. As Tovar continued backing away, he spotted a bystander between him and the suspect. He had the presence of mind to wait until the person was out of harm’s way before firing at the suspect. Even with his injury, Tovar was able to broadcast the suspect’s vehicle description and direction of travel, resulting in the suspect ultimately being captured. Troopers arrived on the scene to provide medical aid for his injury, and Tovar was taken to the hospital for further treatment.

Trooper Crystal Cantu, Highway Patrol — Raymondville; Trooper Eloy Perez, Highway Patrol — Raymondville; and Trooper Oscar Tovar, Highway Patrol — Edinburg, each received a Lifesaving Award for their actions on Dec. 11, 2021. That day, Cantu responded to a crash and found a vehicle rolled-over on the side of the road in Hidalgo County. A passenger had a single gunshot wound to her right leg and was bleeding profusely. Cantu immediately applied her tourniquet and requested air support. Tovar arrived to assist, and applied a second tourniquet to the wound. Perez and another Trooper also arrived on the scene. Tovar and Perez took turns applying pressure to the artery to prevent additional blood loss. EMS arrived and took the woman to the hospital.

Trooper Jose Gonzalez, Highway Patrol — Alice; and Trooper Nathan Reyes, Highway Patrol — Alice, each received a Lifesaving Award for their actions on Nov. 27, 2021. Reyes was on patrol in Jim Wells County when he saw a truck on the shoulder of U.S. 281 with its hood and doors open. When Reyes approached, the driver fell out of the pickup. The driver had accidentally shot himself in the leg. Reyes picked up the man and moved him to a safer area, then applied a tourniquet to his upper left thigh. He tried talking to the victim to keep him alert. When the man lost consciousness, Reyes put the victim in his patrol car and brought him to meet the EMS who were already on the way. As Reyes pulled over to meet the ambulance, Gonzalez stopped to assist. Gonzalez applied a second tourniquet and applied direct pressure to stop the bleeding. EMS arrived and provided additional medical treatment before taking the victim to the hospital. They said the use of the tourniquets assisted in saving the victim’s life.

Multiple current and former members of the Texas State Guard, Texas National Guard, DPS personnel and the Tennessee National Guard were recognized with a Unit Citation for their work with the Border Security Operations Center (BSOC) and the six Joint Operations Intelligence Centers (JOICs) from Sept. 1, 2018, through Aug. 31, 2021. These units are led by the Texas Ranger Division and staffed in cooperation with the Texas Military Department, with support from National Guard units. The BSOC and the JOICs have excelled due to exceptional partnerships with the U.S. Border Patrol and numerous state and local agencies within DPS’s South and West Texas Regions. Through sustained effort and commitment, these personnel have deployed and maintained more than 5,000 Drawbridge cameras from El Paso to Brownsville. These surveillance cameras provide real-time information for DPS officers, Border Patrol agents and other law enforcement agencies statewide. The BSOC and JOICs provide daily logistical and technical support, along with training to the officers and agents who use Drawbridge. To ensure Operation Drawbridge’s success, individuals repair and deploy cameras and monitor the 150,000 images transmitted daily. During these three years, there were 91,451 instances of smuggling; 483,501 people who were detected on the cameras; 311,365 migrants who were apprehended; 37,882 turn backs; 84,739 pounds of marijuana seized; 667 pounds of cocaine seized; 167 pounds of methamphetamine seized; and 21 firearms seized.

The following personnel were recognized: