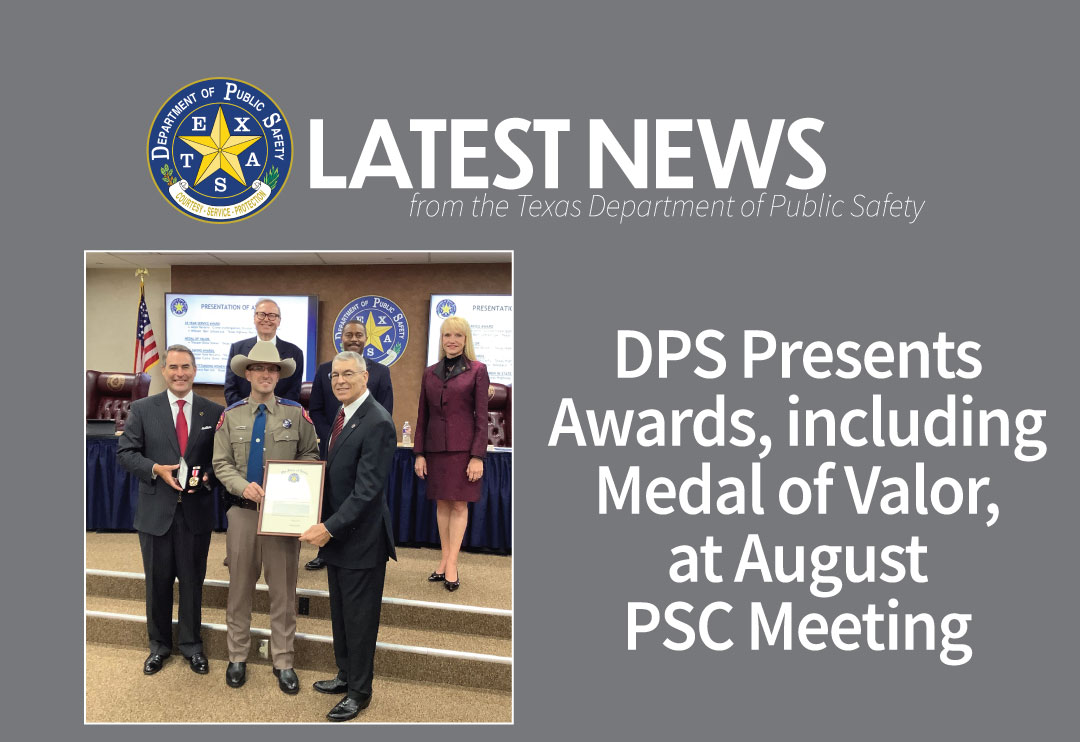 AUSTIN – The Texas Public Safety Commission (PSC) along with Texas Department of Public Safety (DPS) Director Steven McCraw presented one Medal of Valor, the highest honor and award bestowed by DPS, two Lifesaving Awards and two Director’s Awards to department personnel at the PSC meeting on Thursday, Aug. 12, at DPS Headquarters in Austin. The Outstanding Women in State Government Award was also presented.

“These awards exemplify the bravery and dedication that our employees exhibit on a daily basis within DPS,” said DPS Director Steven McCraw. “I’m pleased to recognize each of these men and women for their service and commitment to the state of Texas.”

Trooper Drew Stoner, Highway Patrol — Rosenberg, received the Medal of Valor for his actions on Feb. 20. That day, as he was pulling out of his cul-de-sac to begin his shift, he saw two men in a driveway. Then he heard gunfire and saw one of the men shot several times in the chest. The suspect walked up the driveway and entered the house through the open door. Stoner left his vehicle and went to the house with his weapon drawn. As he looked through the front door, he saw the suspect in the hallway with a weapon. Stoner shouted commands, startling the suspect, and the man complied with the order to drop his weapon and lay on the ground. Stoner approached the man, kicked the gun away and apprehended him. He then assessed the house and found a female with a gunshot wound. Stoner was able to provide medical assistance to the woman until EMS arrived. The male victim in the driveway did not survive.

Technical Sgt. Kyle McCarty, Highway Patrol — Weslaco, received a Lifesaving Award for his actions on May 26. McCarty was dining with Sgt. James Price and Sgt. John Messer when Price began choking. He rushed to the restroom, with McCarty following. McCarty asked Price if he could perform the Heimlich maneuver and Price nodded yes. After correctly performing it, the piece of food became dislodged, allowing Price to breathe once again.

Curtis “Drew” Woodard, Highway Patrol — Bowie, received a Lifesaving Award for his actions on March 16, while working with the Special Operations Group and U.S. Border Patrol Agents. Together they rescued a six-month-old and her mother from the Rio Grande River. The pair were crossing the river in rafts with 67 adults and 150 children near Roma when smugglers threw the mother and baby out of the raft. Woodard heard the splash, followed by the woman, who had a broken leg, calling for help. He moved through the thick brush, climbed a tree and pulled the mother and baby out of the water to safety.

Lee is recognized by DPS and the court system in Texas as a subject matter expert in crash investigation and reconstruction. She is the second female in DPS history to serve on the Department’s State Crash Reconstruction Team. She is an instructor, a Field Training Officer (FTO) and has taught hundreds of DPS recruits, Troopers and officers from other law enforcement agencies. Lee is widely respected for her skills and abilities, as well as serving as a mentor and exceptional role model for all women in the law enforcement profession.

Assistant Chief Todd M. Early, Infrastructure Operations Division — Austin, received a Director’s Award for his 27 years of service to DPS. During his time at DPS, Early became the subject matter expert in radio operability and through his leadership and knowledge, DPS Troopers and law enforcement across the state of Texas have been made safer in their everyday duties. Early will retire on Aug. 31, 2021.

Lt. Col. Randall B. Prince, Deputy Director of Law Enforcement Operations — Austin, received a Director’s Award for his 32 years of service to DPS. During his time at the department, Prince rose from being a Trooper to the division chief of the Texas Rangers before reaching his current position. He is the epitome of professionalism and has mentored many people during his tenure at DPS. He has demonstrated true leadership to the state of Texas. Prince will retire on Aug. 31, 2021.

Photos from today’s awards ceremony can be found on the DPS Facebook page.