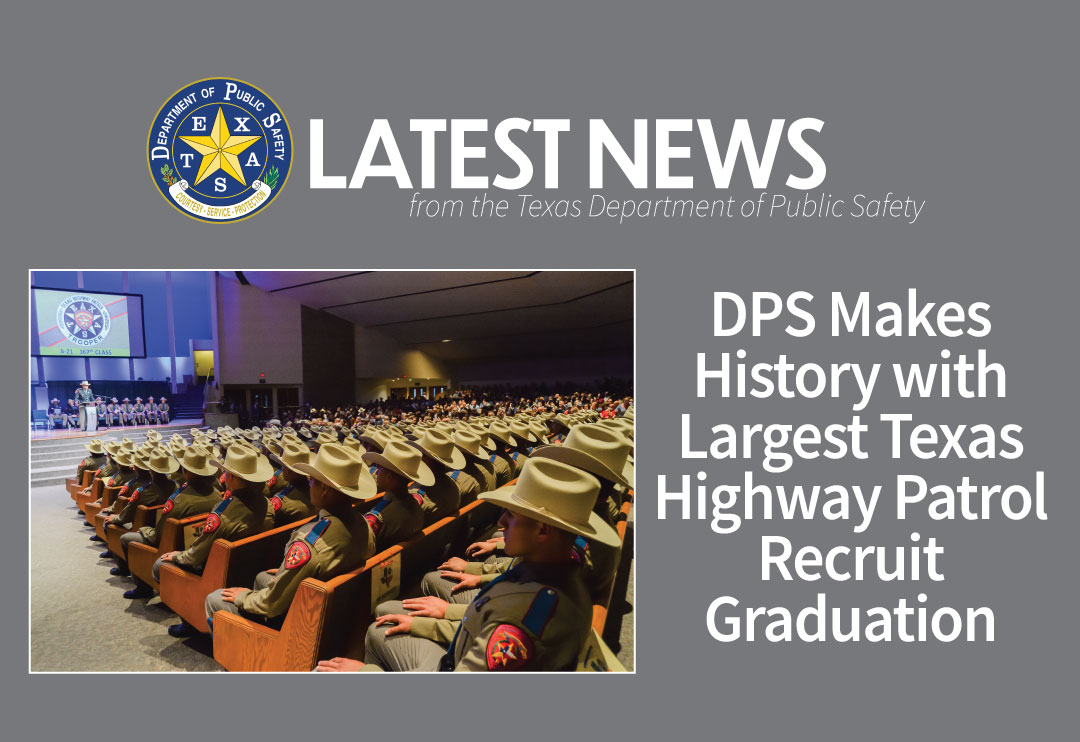 AUSTIN – The Texas Department of Public Safety (DPS) commissioned 145 new Texas Highway Patrol Troopers from its A-2021 recruit class during a graduation ceremony on Friday, July 30. It’s the largest recruit school graduation in DPS history and also one of the most diverse. The keynote speaker at Friday’s graduation was Texas Gov. Greg Abbott.

“Texas is exceptional because of the people who call our state home, and it is your fellow Texans that you have sworn to protect and serve as you join the most elite state law enforcement agency in the nation,” Abbott said. “On behalf of the Lone Star State, we are so grateful for your sacrifice and commitment to serving your communities. You will face challenges along the way, but never forget that what you do matters. It matters to the over 29 million Texans who depend on you every single day to keep our communities safe. And I have no doubt that after today, our state will be made safer by the brave men and women in this room.”

The ceremony was held at the Great Hills Baptist Church in Austin. This was the department’s 167th recruit class, with recruits ranging in age from 21 to 50 years old. This year’s class included 21 females graduating, the most in one recruit class.

“These recruits worked hard in challenging circumstances during the pandemic to get where they are today. We are thankful they’ve chosen to dedicate themselves to this career path and know they represent our state well,” said Texas Public Safety Commission Chairman Steven P. Mach. “We are also grateful to Gov. Greg Abbott, Lt. Gov. Dan Patrick and House Speaker Dade Phelan, as well as our Legislature, for their continued support of DPS and all that it does. It is with their support that DPS is able to continue protecting this state and the people in it.”

This year’s recruit class includes 16 people from other states, including Florida, Pennsylvania and Missouri. Most though are from cities throughout Texas, including El Paso, Georgetown, Eastland, Waco, McAllen and Stinnett.

“Class A-2021 is reflective of DPS and the many backgrounds of those within our department,” said DPS Director Steven McCraw. “I’m pleased to have such a large recruit class to further bolster the Troopers already serving our state. These men and women underwent a rigorous process to become Texas Highway Patrol Troopers, and I welcome them to DPS.”

There are 40 veterans and 22 recruits with prior law enforcement experience in Class A-2021. The graduating class includes a former geophysicist, a former employee of the Mississippi Bureau of Narcotics, a former sky crane operator, someone whose spouse is in the FBI Academy and several who are third- and fourth-generation Troopers.

During their 27-week training academy, the recruits underwent regular COVID-19 testing. Additional preventative measures were taken to minimize contact between recruits and staff members, including being divided into multiple classrooms, being socially distanced during meals in the cafeteria and being spread out in the barracks.

The recruits will report to their individual duty stations on Aug. 22.