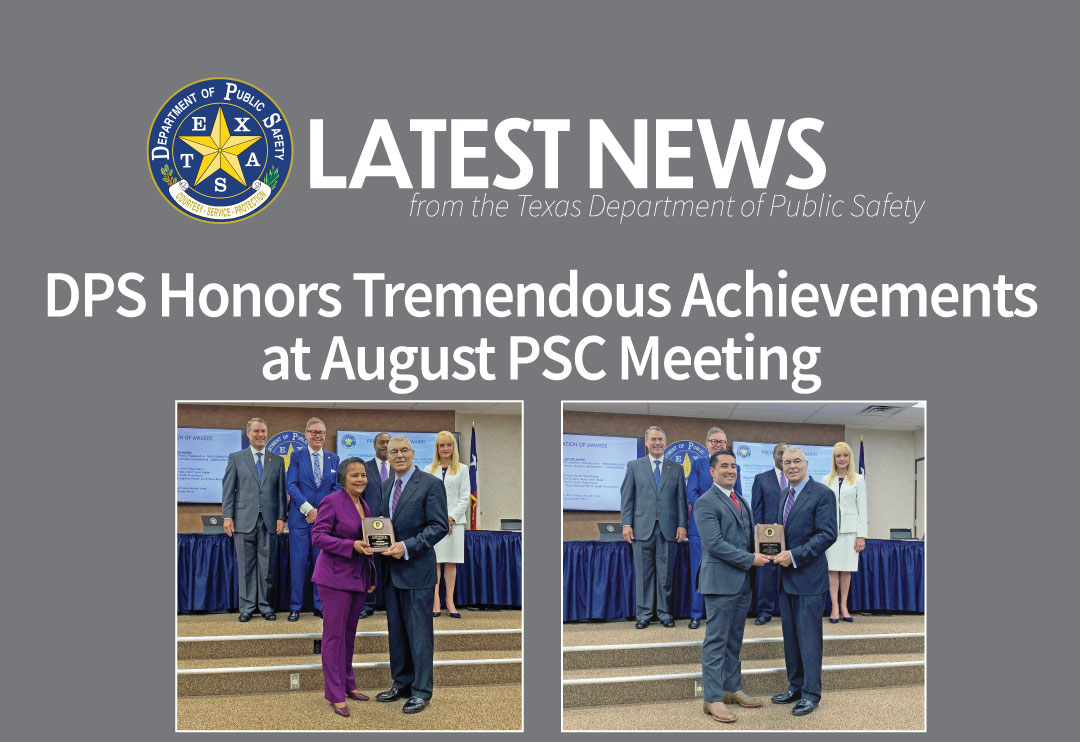 AUSTIN – The Texas Public Safety Commission (PSC) along with Texas Department of Public Safety (DPS) Director Steven McCraw presented two Adolph Thomas Distinguished Service Awards, four Lifesaving Awards and a Unit Citation to department personnel at the PSC meeting on Thursday, Aug. 25, at DPS Headquarters in Austin. Two Director’s Awards were presented to partner agency members at the meeting and additional department personnel were recognized for awards recently received from outside the agency.

“These awards are a huge testament to the incredible work taking place inside the department and the critical collaboration with partner agencies that make it all possible,” said DPS Director Steven McCraw. “We are all safer because of these individuals and I am honored to be able to recognize them for their commitment to the job.”

Zelda Carson, Training Operations Division (TOD) — Headquarters, and Capt. John J. Miller, Texas Ranger Division – Headquarters, each received the Adolph Thomas Distinguished Service Award, which is given annually to one commissioned and one non-commissioned employee. The award is named after Adolph Thomas, the first Black DPS Trooper. Thomas worked in the Texas Highway Patrol, Narcotics, served as Commander of the Training Academy and retired as Chief of Staff Services. He excelled in mentoring fellow employees, training others and civic engagement. This award, which was first given in 2018, was created to honor DPS employees who display excellence and distinguish themselves in those same three areas.

Capt. John J. Miller joined the department as a Texas Highway Patrol Trooper in Yoakum in 2014. In 2016, he was selected to serve on the Special Weapons and Tactics (SWAT) team at DPS Headquarters. In 2021, Miller promoted to Lieutenant in SWAT and was placed in charge of the “Charlie” squad in Edinburg. He is a Special Forces Sergeant in intelligence and assists with operations in the 18th Group, Camp Bullis, Texas. His military duties include integrating operations and intelligence and serving as the all-source intelligence fusion cell and tactical team leader. He maintains top secret clearance and is fluent in Arabic and Spanish. He’s completed several deployments and been awarded the Bronze Star, Army Commendation with “V” Device, and Combat Infantryman’s Badge. Miller received his Bachelor of Arts in political science in 2014, and in 2021 received his Master of Science in criminal justice. He is currently seeking his Ph.D. in Criminal Justice and Criminology. While serving DPS, he has provided instruction on the Urban Operations Fundamentals Course, Intelligence and Operational Design, Urban Operations Advanced Course, and has lectured on contemporary counterterrorism and the recruitment and radicalization of homegrown violent extremists. Over the last two years, the Special Operations Group (SOG) has responded to four hostage rescue situations in which the hostages were saved from serious bodily injury and/or death due to the tactics he introduced. Miller’s knowledge, passion, leadership and devotion to duty have led to significant professional enhancement of the SOG and their ability to better serve our employees, and the citizens of this state.

License and Permit Specialist Tina Cooper, Driver License Division – Daingerfield, and License and Permit Specialist Mayla Honeycutt, Driver License Division – Daingerfield, each received a Lifesaving Award for their actions on Sept. 27, 2021. The pair was returning from a training class in Texarkana when they saw an SUV parked in the median of I-30 with a man attempting to flag down help, and a woman holding a baby in distress. Cooper and Honeycutt parked on the shoulder and ran to assist. They realized the infant was unresponsive, so Cooper called 911 while Honeycutt attempted CPR. After trading roles, and while Cooper conducted mouth sweeps, the infant’s airway cleared, and he began breathing in a labored manner. Cooper kept his airway open and intermittently used a suction bulb in attempts to remove any obstruction from his airway. Paramedics arrived on the scene and took over medical care. The infant was transported via helicopter to a children’s hospital where he was expected to make a full recovery.

Trooper Nathan Crow, Highway Patrol — Alice, received a Lifesaving Award for his actions on Nov. 1, 2021, while working Operation Lone Star in Starr County. During patrol, Trooper Crow saw an SUV disregard a red light. When he attempted to initiate a traffic stop, the vehicle entered the center turn lane and came to a quick stop. The driver got out and ran to Trooper Crow holding a nine-month-old baby that was not breathing. Trooper Crow contacted Weslaco Communications and requested paramedics, then began life-saving measures by attempting to clear the child’s airway. Trooper Jose Gonzalez arrived on the scene to assist. Shortly after, the baby began to breathe, and Trooper Gonzalez, who is an EMT, retrieved his medical equipment and began monitoring the baby’s respirations. EMS personnel arrived on the scene, and after a short while, the baby began to breath normally.

Trooper Genaro Hinojosa, Jr., Highway Patrol — Laredo, received a Lifesaving Award, and United States Border Patrol (USBP) Agents Jesus Manuel Rodriguez and Jorge Trevino were each awarded a Director’s Award for their heroic actions on March 24, 2022, while working Operation Lone Star in LaSalle County. That day, DPS Communications placed a lookout for a vehicle that failed to stop for an immigration inspection at the USBP checkpoint. USBP located the vehicle and deployed stop sticks during a vehicle pursuit. The vehicle hit a post, came to a stop and caught fire. The driver fled into the brush but was quickly located by USBP Agents and DPS Troopers. The driver then told authorities there was a girl still inside the burning vehicle. Sgt. Hinojosa and Agent Trevino ran to the vehicle. Sgt. Hinojosa broke the rear window with his baton and began searching inside. Agent Rodriguez joined the effort to search the rear seat and found a wooden speaker box and nylon carry bag. All three worked together to remove the bag and carry it to safety. A female subject was discovered inside the bag. She was uninjured and released to USBP.

Members of Sergeant Area 5B10 received a Unit Citation for their work to stop the smuggling of drugs and currency in the Northwest Texas Region. In August 2017, the department created Sergeant Area 5B10 which was comprised of one sergeant and nine Troopers. The 5B10 Area concentrated efforts along I-40, with an emphasis on drivers crossing the Texas Panhandle smuggling narcotics and illegally gained US currency. From August 2017 through December 2021, the unit had 320 significant illicit drug and currency seizures. This included marijuana, THC products, methamphetamine, cocaine, heroin and fentanyl, as well as more than five-million-dollars in US currency. The success is due to their criminal interdiction techniques in roadside interviews, vehicle searches and their knowledge of fourth amendment search and seizure case law. These Troopers have been recognized both statewide and nationally for their efforts, and recently received the National Criminal Interdiction Award from the White House Office of National Drug Policy for the year 2020. The employees commended for their hard work and dedication include Sergeant Oscar Esqueda, Corporal Darrin Bridges, Troopers Danny Nunez, Richard Pacheco, Edgar Castillo II, Max Honesto, Alexandrea Moroles, Stephen Bond, Michael Little and Jorge Perez.

The following individuals or groups were also recognized for their significant achievements:

The Watch Intelligence and Information Program (WIIP) is the recipient of the 2021/2022 National Fusion Center Association Best Collaborative Effort Award. As the 24/7 component of the Texas Fusion Center, WIIP collaborates with multiple internal and external partners to provide a wide range of analytic support to law enforcement and public safety officials throughout Texas and the nation.  Analysts in the WIIP exhibit the highest level of vigilance, teamwork, dedication and excellence in analytic tradecraft, which are essential, given the broad range of responsibilities they oversee. However, nowhere is the WIIP’s commitment and collaboration more evident than its handling of Suspicious Activity Reporting, including threats to life.

On September 15, 2021, WIIP analysts received a tip from a community member via the iWatchTexas website in which the reporting party was concerned about posts made on a popular chat/social media platform, by a user who claimed to have killed his family.  Through advanced open-source intelligence research and collaboration with the FBI, DPS Criminal Investigations Division, and local law enforcement in Texas and Alabama, the analysts helped the San Patricio Sheriff’s Office positively identify and locate the juvenile subject at his home in Ingleside, Texas.  The subject refused to surrender and ultimately committed suicide.  Upon entering the subject’s home, deputies discovered the subject had indeed shot and killed his mother, father, sister, and family dogs. A search of the subject’s vehicle revealed a large number of firearms and ammunition, as well as other evidence that indicated the subject was likely planning a school attack. While the deaths of the family are undeniably tragic, the swift response by the analysts and the coordination with investigative partners helped prevent further tragedy. This is one of the countless examples of dedication and excellence these analysts display every day.

The 2021/2022 Fusion Center Award was recently given to two Maritime Intelligence Analysts, Hilary Martinez, Intelligence and Counterterrorism Division – Headquarters, and Marisa Brusuelas, Intelligence and Counterterrorism Division – Houston. The Joint Maritime Domain Awareness Steering Committee recognized their excellence and dedication in every aspect of their roles as analysts with the Texas Fusion Center and how it has greatly enhanced the relationship with the maritime industry, while simultaneously strengthening the overall security posture for this domain. The analysts routinely strive to meet the intelligence needs of their customers and increase nationwide awareness of threats in the maritime domain through their intelligence products. Their attention to detail, hard work and commitment to maritime security in Texas and nationwide have earned the Fusion Center’s Maritime Intelligence Program countless distinctions and praise from partners, who undoubtedly view the analysts as intelligence leaders in the maritime domain in Texas and nationwide.

Maritime Intelligence Analyst Hilary Martinez, Intelligence and Counterterrorism Division – Headquarters, was also recently recognized with the 2021/2022 Michael Schooler Critical Infrastructure Protection Award. In 2021, Martinez made important contributions to a Texas DPS intelligence assessment that identified key threats to the Texas maritime environment based on Suspicious Activity Reporting. She authored an information bulletin that discussed malicious cyber activity which targeted maritime facilities in Texas by exploiting ongoing, real-time threats such as the COVID-19 pandemic and the Atlantic hurricane season. Her daily monitoring helps protect maritime and critical infrastructure in her sector from suspicious activity and potential physical threats from numerous actors, including those affiliated with hostile foreign nations, transnational criminal organizations and terrorism. Her duties are important for state and national security, and she performs them with exceptional work ethic and competence.

Please join us in honoring all the above award recipients. We thank them for their tremendous work in making Texas, and our country, a safer place.

Additional photos are available on the DPS Facebook Page.