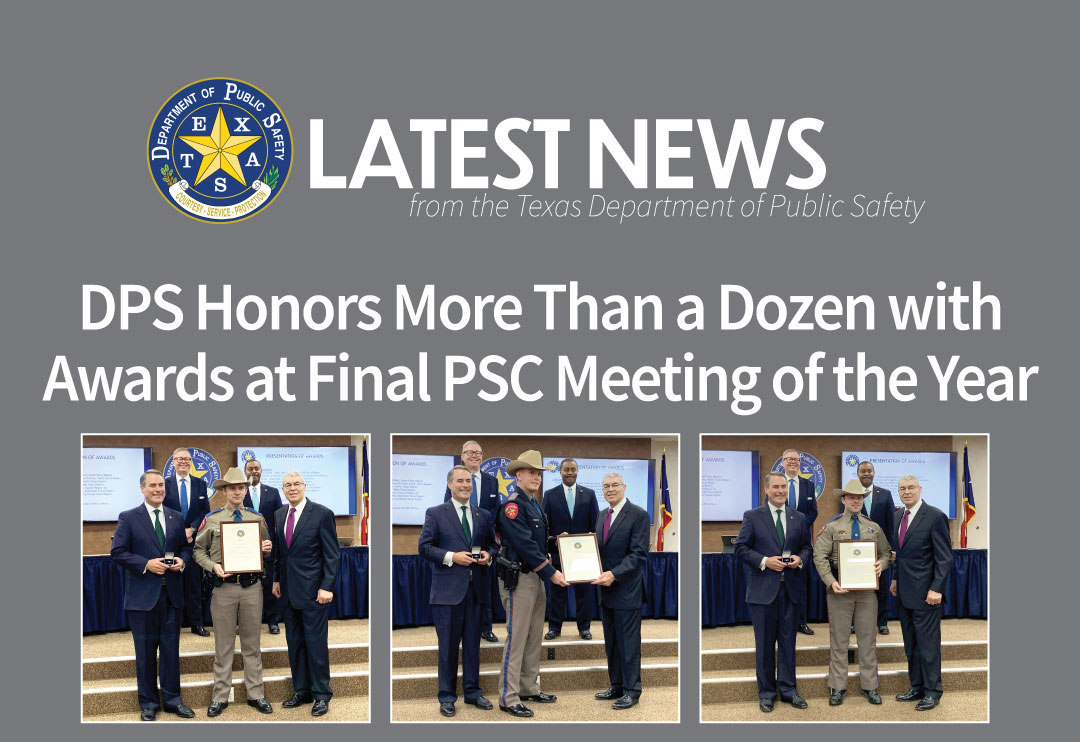 “I’m honored to recognize these individuals for their commitment and dedication to the mission,” said DPS Director Steven McCraw. “These are people who are saving lives, and we’re proud to be able to celebrate and thank each of them for their service to the state of Texas.”

Trooper Jose H. Gonzalez, Texas Highway Patrol — Harlingen, received a Lifesaving Award for his decisive and professional response to a life-threatening situation on Nov. 1, 2021. On that day, Trooper Gonzalez responded to a scene at an intersection in Starr County to assist with a baby who was not breathing. Upon arrival, he began assisting Trooper Nathan Crow, who had already arrived, with administering additional strikes on the baby’s upper torso and clearing the mouth and nose. Once the baby began to breathe, Trooper Gonzalez, who is also an EMT, retrieved his medical equipment and began monitoring the baby’s respirations. EMS personnel arrived on scene, and after a short while, the baby recovered.

Special Agent William Alston, Criminal Investigations Division (CID) — Mount Pleasant, received a Lifesaving Award for his quick actions on July 21, 2022. Special Agents William Alston and Nisha Thompson were surveilling the Rio Grande River when they observed a group of ten undocumented immigrants attempting to cross. The group was comprised of adults, an infant and two young children being carried by their respective mothers. As the group crossed, several people were swept downriver. Special Agents Alston and Thompson attempted to throw rescue ropes but were unsuccessful. One of the mothers then dropped the two-year-old child who subsequently went under water. Special Agent Alston grabbed a flotation device, jumped into the river, swam approximately thirty-five yards and recovered the child. He then noticed the other child was also drowning and was able to save that child as well. Once the children were safe, Alston gave the flotation device to the adults in the group who were also struggling. Once out of the water, both children were medically evaluated, and it was determined that both were uninjured.

Trooper James Glaze, Texas Highway Patrol — Plano, received a Lifesaving Award for his response to a life-threatening situation on Feb. 22, 2022. Trooper Glaze was traveling on IH-20 when he stopped to assist what he believed to be a stranded motorist. He then discovered the driver was clearly in distress and unable to communicate. Trooper Glaze detected an unusual odor, which he recognized to be a sign of someone experiencing diabetic ketoacidosis, a possible life-threatening medical crisis. After calling for an ambulance, Glaze retrieved his medic bag and administered oral glucose. The driver slowly showed signs of improvement; however, the crisis was not fully averted. As fire department personnel arrived on scene and assumed medical care, paramedics determined he was experiencing a diabetic stroke and immediately transported the subject to a local hospital for further medical treatment.

Trooper Sean Hazel, Texas Highway Patrol — Midland, received a Lifesaving Award for his swift response at the scene of a crash on Feb. 20, 2022. That day, Trooper Hazel observed a motorcyclist driving in a reckless manner and initiated a traffic stop. A vehicle pursuit ensued for several miles before the rider entered a construction area, drove into the center median and crashed after striking construction supplies. Trooper Hazel immediately ran to the rider and discovered that he was not breathing and unresponsive. Without hesitation, Hazel began performing chest compressions, while attempting to communicate with the subject. After approximately three minutes, the driver began to breathe on his own; however, he stopped breathing again. Trooper Hazel continued CPR efforts, and the subject was resuscitated. EMS personnel arrived on the scene, and the rider was transported to a local hospital where he was treated for numerous broken bones and lacerations.

Trooper Michael Lueck, Texas Highway Patrol — Capitol, received two Lifesaving Awards for his heroic actions during two separate incidents. The first took place on Nov. 6, 2021, when Trooper Lueck responded to a report of an altercation that led to shots being fired at Wolf Ranch in Georgetown. Early information suggested one person had been shot in the chest. When Trooper Lueck arrived on scene, Georgetown Police Officers had secured the weapon and were handcuffing the suspect. Trooper Lueck grabbed his medical trauma kit and began rendering first aid to the gunshot victim by applying a Hyfin chest seal to the entry wound. He moved the victim onto his side and applied a second chest seal to the exit wound on the victim’s back. During his assessment, Trooper Lueck determined the victim was in shock, and his condition was deteriorating. EMS personnel arrived on the scene and transported the victim to a local hospital for additional treatment.

Trooper Lueck’s second Lifesaving Award is for his actions during an incident on May 18, 2022, when Trooper Lueck heard a call of “shots fired” over the radio and immediately traveled to the scene. Upon arrival, he observed officers taking cover behind two police vehicles and a black passenger vehicle with multiple bullet holes. After joining the officers behind the patrol units, Trooper Joseph Mansion began giving verbal commands to the driver of the vehicle over the loudspeaker. A male subject crawled out of the driver’s seat onto the ground, at which time Trooper Lueck noticed he was bleeding from his legs and torso. He also observed the subject was unarmed, so he put away his patrol rifle, retrieved his medical bag and advised officers that he, under their cover, would retrieve the subject and provide medical aid. Troopers Lueck and Mansion retrieved the subject and moved him behind the patrol vehicles. Trooper Lueck then identified two gunshot wounds to the upper left chest, multiple gunshots to his legs and a gunshot wound to his back. He applied chest seals to each of the wounds on his torso and a tourniquet to the left leg to control the bleeding. As EMS personnel arrived on scene, Trooper Lueck continued providing care to the subject while briefing them on the injuries. The subject was transported to a local hospital for additional medical treatment and was booked into the Williamson County Jail on multiple charges two days later.

Trooper Ethan McAdoo, Texas Highway Patrol — New Caney, was awarded a Lifesaving Award for his actions at a crash scene on June 19, 2022. Trooper McAdoo was dispatched to a two-vehicle head-on crash in New Caney that day. He was the only first responder on the scene when he arrived. As he made contact with the driver of one of the vehicles, McAdoo observed severe injuries to both legs. His right leg had massive injuries, and he was losing a large amount of blood. Trooper McAdoo retrieved his tourniquet; however, while trying to apply it, the tourniquet broke. McAdoo continued to use the tourniquet and make it as tight as possible to slow the loss of blood. When EMS personnel arrived on scene, Trooper McAdoo obtained and applied a second tourniquet and successfully stopped the bleeding. EMS personnel assumed primary care of the patient, and he was transported to a local hospital for further medical treatment. He was later released and is receiving physical therapy to regain full use of his leg.

Trooper Brian Barnes, Texas Highway Patrol — Nacogdoches, received a Lifesaving Award, and Deputy Ron Wherry, Nacogdoches County Sheriff’s Office received a Director’s Award, for their quick thinking and heroic actions on July 9, 2022. Trooper Barnes responded to an emergency broadcast of an unconscious child found submerged in a rural pond. As the first responder on the scene, Barnes discovered a lifeless five-year-old. Upon assessing the child’s condition, Trooper Barnes began administering CPR. Nacogdoches County Sheriff’s Deputy Ron Wherry was the second responder on the scene and immediately began assisting Trooper Barnes in CPR efforts. Both officers remained calm and focused under extreme conditions during the chaotic situation. After approximately two minutes, the child was revived. Trooper Barnes and Deputy Wherry continued to provide aid to the child until emergency medical services personnel arrived on the scene to take control.

Steven Taylor was awarded a Director’s Award for his brave actions on July 30, 2021, in Leon County. Mr. Taylor drove upon the scene of a major accident on US Highway 79 where a motorcycle had struck a pickup truck towing a horse trailer. Mr. Taylor arrived on the scene prior to any police, fire or EMS personnel. As a former combat medic in the United States Army, Mr. Taylor exited his vehicle and began assessing the scene and those involved. Mr. Taylor observed the motorcyclist’s leg had been amputated below the knee, and he was lying on the roadway, rapidly losing blood. Mr. Taylor utilized his training and experience to create a makeshift tourniquet using a belt, which he applied to the uppermost portion of the subject’s leg. Mr. Taylor continued to care for the subject and remained in constant communication with emergency service dispatchers, relaying accurate updates until EMS personnel arrived on the scene. Once EMS personnel arrived, the subject was transported via helicopter to a hospital where he received extensive medical treatment.

Members of the Criminal Investigations Division (CID) Southeast Texas Region received a Unit Citation for their work in combating drug trafficking across the country.

In 2019, DPS’ CID Methamphetamine Initiative Group (MIG) initiated a joint state and federal investigation into the TRAN Drug Trafficking Organization (DTO), which was responsible for the distribution of several hundred kilograms of fentanyl and methamphetamine, including counterfeit pills in Texas, Louisiana, Oklahoma, Illinois and Georgia, by means of numerous clandestine laboratories in the greater Houston area.

The investigation, dubbed “Toretto's Nightmare,” generated additional investigations in multiple states. Criminal and financial analysts from DPS’ MIG and Intelligence and Counterterrorism Division, DEA, FBI and IRS collaborated to identify multiple members of the organization and provide investigative support, which resulted in asset seizures totaling more than $1.5 million. Additionally, officers arrested 13 defendants, seized 19 firearms and seven vehicles. Of note, during a single operation, officers seized a clandestine lab resulting in the confiscation of 124 kilograms of methamphetamine and 274 kilograms of fentanyl with an estimated street value of more than $12 million. This was confirmed by the DEA as the largest single seizure of fentanyl in U.S. history.

The TRAN DTO was dismantled in November 2019. All cases are currently pending, with each defendant facing a minimum of 10 years in federal prison.

Working collaboratively with DPS’ Criminal Investigations Division, Robinson and Unnasch provided critical information and analysis to help law enforcement partners around the state and nation capture 34 of Texas’ most wanted fugitives in 2021. This breaks the previous record of 32 arrests set in 2013. Through their tremendous work in the Texas Ten Most Wanted Program, these analysts helped law enforcement protect and serve their communities by getting wanted criminals off the streets. Governor Abbott’s letters concluded by stating, “Your work has made Texas communities safer, and as such, you represent the best of the Lone Star State.”

We congratulate all of today’s award recipients and thank them for their incredible work. Photos from the awards ceremony can be found on DPS’ Facebook page.