AUSTIN - The Texas Department of Public Safety (DPS) Director Steven McCraw today was joined by members of the Texas Public Safety Commission (PSC), including PSC Chairman Steven P. Mach, as the department commissioned 122 men and women as the state’s newest Highway Patrol Troopers. Chairman Mach was the keynote speaker during the recruit graduation ceremony, which was held today in Austin.

“It takes a special kind of person to be willing to sacrifice their safety in order to protect others from danger,” Chairman Mach said. “In joining DPS, you have declared to the world that you intend to live a life of purpose serving and protecting the people of the great State of Texas. We are extremely fortunate for your dedication to duty and are proud of each and every one of you – our newest Texas State Troopers.”

The A-2017 class, which is the department’s 159th training class, included 15 women, 12 former peace officers and 48 military veterans. The oldest graduate is 49-years-old and the youngest is 21-years-old. The class also included a Trooper whose father, a Highway Patrol Sergeant, died in the line of duty in 2015. It was also the first (known) time two sisters graduated in the same class.

“These 122 graduates will join their fellow DPS Troopers as a first line of defense against a wide variety of threats in the communities they serve,” said Director McCraw. “We are counting on you to help make your communities safer, and to uphold the tradition and standards of the Texas Highway Patrol.”

The new Troopers will report to duty stations across Texas in the coming weeks and spend the first six months in on-the-job training.

DPS is currently accepting applications for recruit classes scheduled for 2018. The next application deadline is Oct. 1, 2017, for the class beginning July 8, 2018. Are you up to the challenge? To apply or for more information about joining the legion of brave and outstanding officers at the Texas Department of Public Safety, visit Join DPS.

In addition, DPS schedules recruiting events throughout the year. To find an event in your region, visit Recruiting Events. 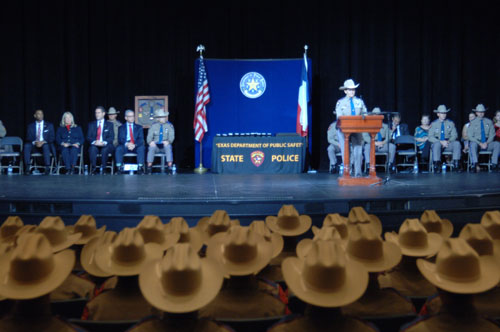