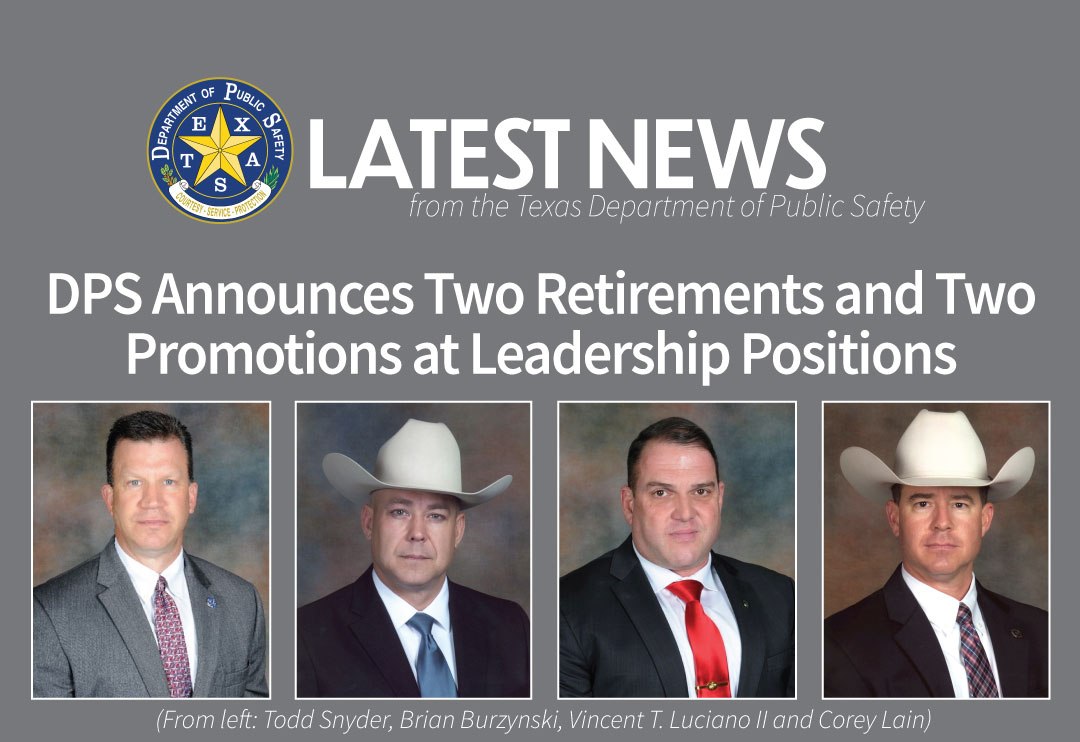 Todd Snyder has served DPS faithfully for the past 26 years. He began his career in law enforcement with the Nolan County Sheriff’s Office. After four years, he joined DPS in 1996 as a Texas Highway Patrol Trooper. In 2000, he promoted to Criminal Law Enforcement sergeant/investigator, and in 2003, Snyder promoted into the Texas Rangers Division. He served as a Ranger from 2003 to 2013, before promoting to lieutenant, then captain, and finally major in 2015. Snyder then served as Assistant Chief of the Texas Rangers until his promotion to Regional Director of the Central Texas Region in 2019.

As a Ranger, Burzynski was one of four Texas peace officers to receive the Governor’s Public Service Award in 2007. That same year, he won the Austin Chronicle’s Award for Best at Restoring Faith in Law Enforcement, and in 2008, received the “Bill Bass” Outstanding Graduate Award at the University of Tennessee’s National Forensic Academy. Burzynski was honored by the 80th Texas Legislature with the passage of House Concurrent Resolution 23 for his investigation into the Texas Youth Commission.

Burzynski served in the United States Army and is a combat veteran from the first Gulf War. He was a top graduate of the Texas Panhandle Law Enforcement Academy and also worked for the Hereford Police Department.

“These two men have dedicated their lives for many years to the people of this state, and we cannot thank them enough for their service and sacrifice,” said DPS Director Steven McCraw. “We’re also proud to be able to promote such talent from within to take over these critical leadership roles in the department; we know they will do great things.”

These two retirements created vacancies which are being filled through promotions. These promotions were approved by the Public Safety Commission during its meeting on Thursday, Aug. 25. This includes current Criminal Investigations Division Major Vincent T. Luciano II promoting to Regional Director for the Central Texas Region in San Antonio, and Texas Ranger Major Corey Lain promoting to Assistant Chief of the Texas Rangers Division.

As Regional Director of the Central Texas Region, Vincent T. Luciano II will be responsible for coordinating all DPS functions, including personnel, for the region. Luciano began his career with DPS in 1995 and most recently served as the major of the Criminal Investigations Division (CID) in North Texas Region. Luciano has more than 27 years of service with DPS. He served as a Texas Highway Patrol Trooper from 1996 to 1998, and a Criminal Law Enforcement Trooper from 1998 to 2000. Luciano then promoted to sergeant in DPS Narcotics in Lubbock before promoting to lieutenant in 2007 in Corpus Christi. He was promoted to CID lieutenant, then captain, and in 2018 promoted again to major. Prior to his career with DPS, Luciano served two years with the Nueces County Sheriff’s Office where his assignments included jailer and sergeant.

Luciano holds a bachelor’s degree in criminal justice from Norwich University and a master’s degree from the University of Incarnate Word in applied administration with a focus in organizational development. Luciano is a graduate of the FBI National Academy Class 257 and Northwestern Staff and Command College. He has been twice awarded Director’s Citations from DPS as well as the FBI Director’s Award. Luciano served in the United States Marine Corps, Army National Guard and is an Infantry Combat Veteran of Desert Storm and Operation Iraqi Freedom 3.

Lain is a certified training instructor and holds a Master Peace Officer certification in the state of Texas. He’s graduated from the DPS Command College Cohort 2 and the Federal Bureau of Investigation National Academy Class 274. He currently serves as the San Antonio Region Representative for the Texas Chapter of the FBI National Academy Association. Lain holds a Bachelor of Science in criminal justice from Sam Houston State University.

Regional Director Luciano will be based in San Antonio, and Assistant Chief Lain will be based at Headquarters in Austin. The promotions are effective Sept. 1.