DPS Announces One Retirement and Promotes Three to Leadership Positions 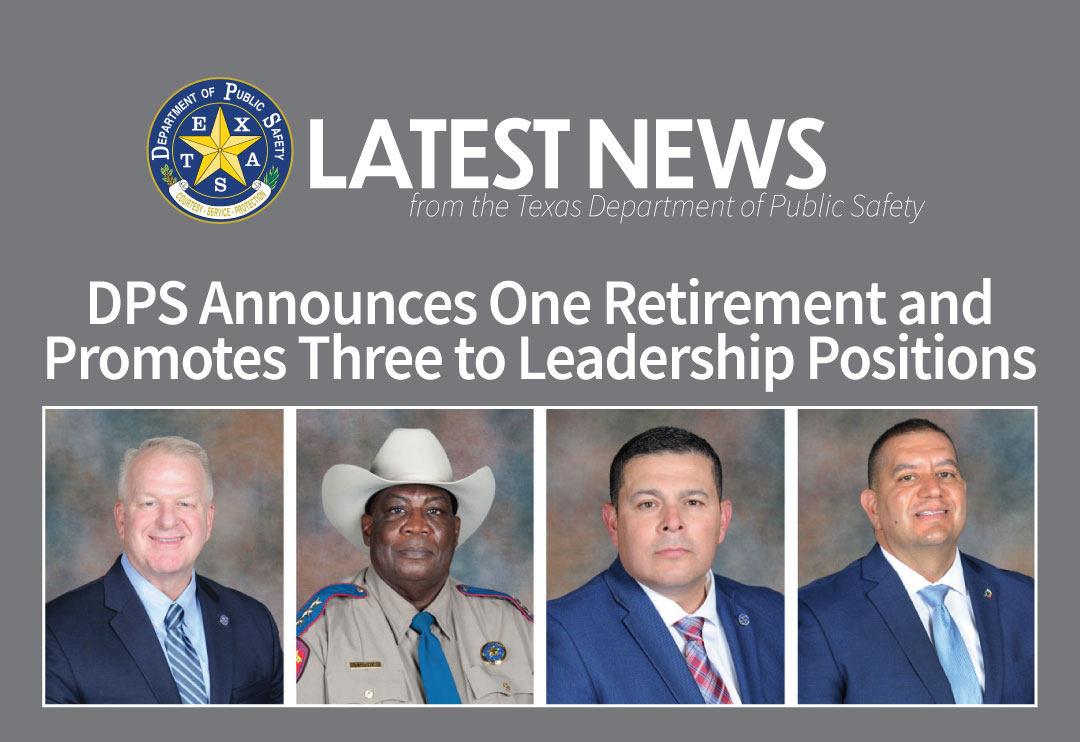 AUSTIN – The Texas Department of Public Safety (DPS) announces the retirement of Lt. Col. Randall B. Prince after more than 32 years of faithful service, along with three promotions to leadership positions. Prince currently serves as the Deputy Director of Law Enforcement Operations for DPS and will retire on Aug. 31. He began with the department in 1988 as a Highway Patrol Trooper in Navasota. Prince was promoted to Sergeant with the Texas Rangers, eventually working his way to serve as Regional Director in the Lubbock regional office before being transferred to headquarters. In 2014, he became the Chief of the Rangers, and in 2018, he was promoted to Deputy Director and Lieutenant Colonel.

“We are pleased to be able to promote talent within DPS, and I congratulate these men for their hard work and dedication,” said PSC Chairman Steven Mach. “All have shown tremendous dedication to the state of Texas during their careers, and I’m sure they will continue to do so.”

“The department is blessed to have a deep bench of talent to choose from, and I’m confident these individuals will do well in their new roles,” he said. “I commend them for their hard work in their careers and earning these positions and look forward to the work we will do together.”

Dwight D. Mathis, Deputy Director of Law Enforcement Operations - As Deputy Director of the Law Enforcement Operations, Mathis will oversee the Criminal Investigations Division, Texas Highway Patrol, Texas Rangers, Aviation Operations Division and six regional directors. Mathis most recently served as Chief of the Texas Highway Patrol Division overseeing THP since March 2020. Mathis has more than 30 years of service with DPS, beginning his career in 1987 as a Trooper stationed in Bay City. He was promoted to Sergeant and served in Webster/Clear Lake, before being promoted to Lieutenant and then Captain, stationed in Bryan. In 2011, he was promoted to Major and assigned to headquarters in Austin. In 2017, Mathis was named Assistant Chief of THP, followed by a subsequent promotion to Regional Director of Region 7, before serving as Chief of THP.

Orlando Alanis, Chief of Texas Highway Patrol Division - As Chief of THP, Alanis will oversee the Highway Patrol, Commercial Vehicle Enforcement, the Motor Carrier Bureau, Tactical Marine Unit, the K-9 Program and the State Crash Reconstruction Team. Alanis most recently served as the West Texas Regional Director, since July 2017. He began his career with DPS in 1996, serving as a Capitol Police Officer in Austin, before becoming a Trooper in 1997, stationed in Alice and Harlingen. He’s been stationed in Eagle Pass, Brownsville and Laredo among his promotions to Captain. In 2014, Alanis was appointed as Major and supervised the uniformed personnel of the West Texas Region, before being promoted to Regional Director.

Alanis has a Bachelor of Science in criminal justice from Lamar University. He is also a graduate of the Governor’s Executive Development Program, as well as the Northwestern University School of Police Staff and Command.

Jose Sanchez, Regional Director West Texas Region - As Regional Director of the West Texas Region, Jose Sanchez will be responsible for coordinating all DPS functions, including personnel, within a 36 county-area, and will be based in El Paso. He began his career with DPS in 1994 following his honorable discharge after three years with the United States Navy. Sanchez began as a Trooper trainee and was stationed in El Paso upon becoming a Trooper the following year. From 1998 to 2000, he was a CLE Trooper attached to Narcotics Region 4, until his promotion to Sergeant Investigator in the Narcotics Service. In 2010, he was promoted to Lieutenant of the Narcotics Service, where he served in Alpine/El Paso through 2012, when he was promoted to Captain of the CID Region 4 in El Paso. Three years later he was promoted to Major of the CID Region 5 in Lubbock, where he’s remained until this promotion.