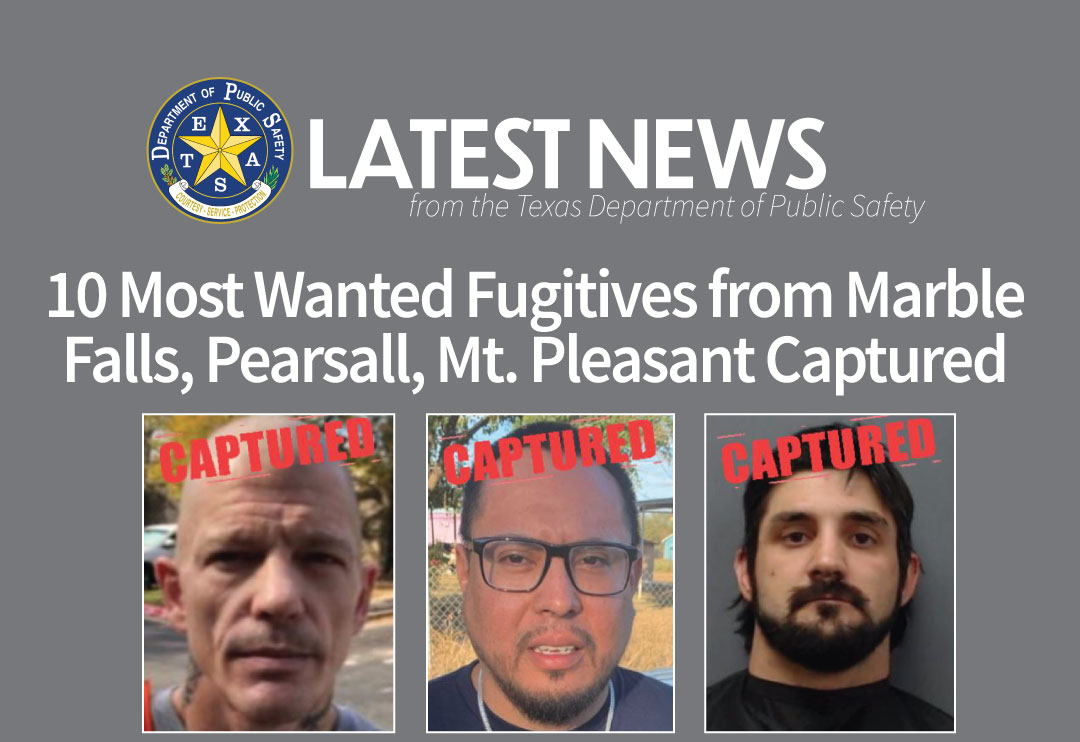 Marshall Willard Brown, 45, of Marble Falls, is affiliated with the Aryan Circle gang. He was arrested at a hotel in northwest Austin by members of the U.S. Marshals Lone Star Fugitive Task Force, including Texas Department of Public Safety (DPS) Special Agents. The Texas Department of Criminal Justice-Office of Inspector General, the Texas Attorney General’s Office and the U.S. Immigration Customs and Enforcement Office assisted in the multi-agency investigation. Brown was added to the Texas 10 Most Wanted Fugitives List on Nov. 29, 2021, two days before his arrest.

Brown had been wanted since June 2020, when the Burnet County Sheriff’s Office issued two bond revocations. The initial charges were for aggravated assault with a deadly weapon and unlawful possession of a firearm by a felon. In 1999, Brown was convicted of burglary of a habitation and sentenced to eight years in a Texas Department of Criminal Justice (TDCJ) prison. In 2013, he was convicted of possession of methamphetamine and sentenced to five years in prison. In December 2019, Brown was arrested by the U.S. Marshals Lone Star Fugitive Task Force after a standoff in Spicewood. He was released on bond the following month. For more information, view his captured bulletin.

Richard Anthony Banda, 34, of Pearsall, was arrested at a home in Dilley by members of the U.S. Marshals Lone Star Fugitive Task Force, including DPS Special Agents. The Highway Patrol, Frio County Sheriff’s Office and Dilley Police Department assisted in the multi-agency investigation. Banda was added to the Top 10 Fugitives List on Oct. 21, 2021.

Banda had been wanted since April 2020, when the Texas Board of Pardons and Paroles issued a warrant for a parole violation. The Frio County Sheriff’s Office also issued two warrants in November 2020 for aggravated assault with a deadly weapon. In 2014, Banda was convicted of aggravated assault with a deadly weapon and received six years of probation. In 2018, his probation was revoked, and he was sentenced to three years in a TDCJ prison. He was released on parole in March 2020. For more information, view his captured bulletin.

Christopher Wayne Davis II, 29, of Mt. Pleasant, was arrested in Longview following a traffic stop by the Longview Police Department, in coordination with DPS Special Agents. Davis was added to the Texas 10 Most Wanted Fugitives List on Nov. 29, 2021.

He had been wanted since May 2021, when the Texas Board of Pardons and Paroles issued a warrant for a parole violation. Later that month the Cass County Sheriff’s Office issued warrants for aggravated assault with a deadly weapon, unlawful possession of a firearm by a felon, possession of marijuana and possession of a controlled substance. In 2016, Davis was convicted of two counts of engaging in organized criminal activity and was sentenced to probation. In 2017, he was convicted of burglary of a habitation and was sentenced to five years in a TDCJ prison. Davis’ probation was also revoked. He was released on parole in May 2020. For more information, view his captured bulletin.

Texas Crime Stoppers, which is funded by the Governor’s Criminal Justice Division, offers cash rewards to any person who provides information that leads to the arrest of one of Texas’ 10 Most Wanted Fugitives or Sex Offenders. So far this year, DPS and other agencies have arrested 33 criminals, including 12 gang members and 16 sex offenders. In addition, $68,500 in rewards has been paid for tips that yielded arrests.